Tuesday, February 7
You are at:Home»News»Nation»Epsom College in Malaysia to start HSK certification programme in September
For the freshest news, join The Borneo Post's Telegram Channel and The Borneo Post on Newswav. 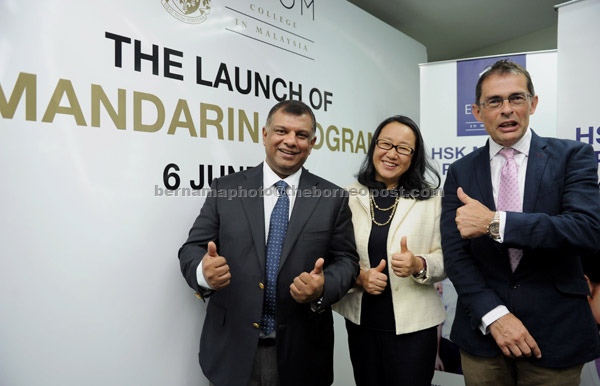 (From left) Fernandes, Leighton and George give the thumbs up to the HSK Mandarin programme. — Bernama photo

The HSK is a globally recognised Chinese language proficiency test which measures the ability of non-native speakers in China for university and job applications.

ECiM chairman of governors Tan Sri Tony Fernandes said the ability to speak in Mandarin could give advantage, especially in a business field.

“It’s a big step for Epsom in Malaysia (to offer this certificate).

“We know this language is important for those who want to succeed,” he told reporters at the launch of HSK Certificate at ECiM, here yesterday.

Meanwhile, George said by introducing HSK certification in its British education system, it would encourage the students to develop fluency in Mandarin and English.

“No one can doubt the importance of Mandarin as an international language of trade, diplomacy, politics and culture.

“We believe that a dual language emphasis is key to a complete education,” he said, adding that the programme was not compulsory for its 400 students.

The HSK Mandarin Language Programme is designed for reading, writing and speaking fluently in a British education system. The programme would be taught by three teachers from China and one from Taiwan. — Bernama