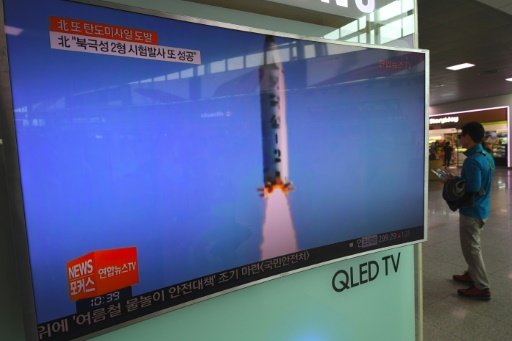 A man walks past a television showing a news report on North Korea’s latest missile test of a Pukguksong-2, at a railway station in Seoul on May 22, 2017. AFP file photo

The official KCNA news agency said the rocket was a “powerful attack means capable of striking any enemy group of battleships attempting at military attack on the DPRK (North Korea) from the ground at will”.

KCNA added the missiles “accurately detected and hit the floating targets on the East Sea of Korea”.

Pyongyang’s fifth test in less than a month was launched in defiance of global pressure to rein in its weapons program.

Moon advocated reconciliation with Seoul’s isolated, unpredictable neighbour but has taken a more stern position in the wake of the missile tests, which pose a policy challenge to the left-leaning leader.

The launches come less than a week after the United Nations expanded sanctions against Kim Jong-Un’s regime in response to recent ballistic missile tests.

The 6,900-ton USS Cheyenne, whose home port is Pearl Harbor, arrived in the South Korean port of Busan Tuesday, as the US steps up its own muscle-flexing in the region.

The North has carried out two atomic tests and dozens of missile launches since the beginning of last year in its quest to develop a missile capable of delivering a nuclear warhead to the continental United States — something President Trump has vowed “won’t happen”. – AFP