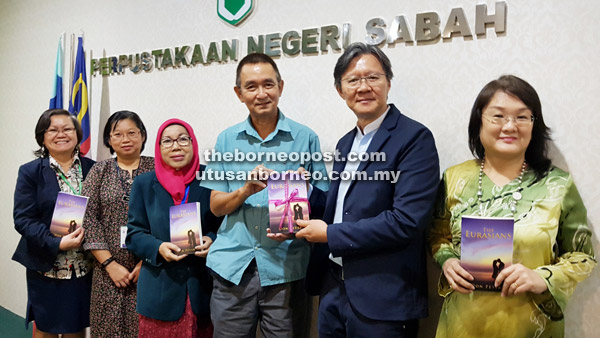 Don handing over his author’s copies to the Sabah State Library director Wong Vui Yin yesterday. The books will be put under the library’s preservation collec-tion.

KOTA KINABALU: Don Peter’s The Eurasians, the first English Romance Thriller book from Borneo taken under the international Partridge Singapore Publishing wing, could hit the silver screen in the future.

Bookworms can easily grab The Eurasians locally here at places like WH Smith in Kota Kinabalu International Airport or Borneo Shop at Wisma Merdeka. They may also purchase it online on websites such as Amazon, Barnes & Noble and eBay.

Movie enthusiasts may even get a chance to watch it in theaters if it passes the difficult boundaries set by the Hollywood Gatekeepers.

“At this moment, it is being pitched to the Hollywood Gatekeepers (by Partridge). Whether they accept or not, we do not know,” revealed Don.

“I was told either they reject it outright, say it is a bad story and do not want to accept it or they will ask me to change it a bit before accepting it,” he said when met after The Eurasians book handover to the Sabah State Library here yesterday.

Launched in September 2016 at The Sabah Society in Damai, The Eurasians took three months to pen in 2006 by the then 45-year-old Donald ‘Don’ Peter.

However, it was his 2015 established blog Travel, Leisure and Golf in Borneo blog that caught the attention of and led to Partridge contacting him in September 2015 for a manuscript.

A year later, Don said his maiden book came to life and he commenced his journey as a published writer trying to break the difficult boundaries to success for any writer in Hollywood.

“If you talk about success in terms of getting my book published and then when I die, the future generation also read it, well that is a success for me.

“If the success benchmark is based on my vision and it is like ten thousand miles, I hardly maybe even completed my ten steps.

“Like every author, they would like their books to be bestsellers, they would like to be taken up by the Hollywood movies, that is my ultimate vision, if it really happens. For that one, I am still far from successful. In other terms, I don’t consider it a success because it is not yet a bestseller, Hollywood still hasn’t noticed it. That is what I am trying,” shared the Sandakan-born Don.

“For a local author to be accepted by Partridge, which is a subsidiary of established publisher Penguin Random House, they will not accept your work if they think it is not up to standard. So this is to me a big achievement for you. For a local first time writer to be accepted,” said Sabah State Library director Wong Vui Yin to Don at the ceremony.

“Sabahans selling books on Amazon are very rare. I have not seen any. It is a big achievement for Don to have his first book to be accepted by Amazon.com, that means internationally. He is not selling it within the confines of Sabah or Kota Kinabalu. I mean anyone, anywhere in the world can go to Amazon.com and order the book from there,” he emphasized.

So far, Don has sold 250 of his at hand 600 first edition author’s copies, printed in America and United Kingdom, at RM80 thus far, whilst the printed on demand books are sold at USD19.55 online.

Spanning from 1964 to 1998, the early chapters begin with English Royal Air Force pilot Aaron Johnson’s secret mission to Borneo during the Indonesian Confrontation in 1964 and his Asian wife as well as Eurasian offspring.

Don also touched on important events of the decades including the Malaysian Agreement 1963, as well as environmental, historical, political and business issues with the actual Sabah landscape backdrop.

“I keep describing North Borneo’s beautiful flora and fauna, wonderful cultures, the beautiful sea, beaches and marine life. We also have beautiful mountains and islands, where you can travel to in an hour and 45 minutes.

“Because of all these beautiful things, I do hope when people read my novel, especially foreigners, they would like to know more about North Borneo,” said Don.

Don went to the then Institute Teknologi MARA to take up Mass Communication in 1982 to 1985 after graduating from All Saints Secondary School in 1977.