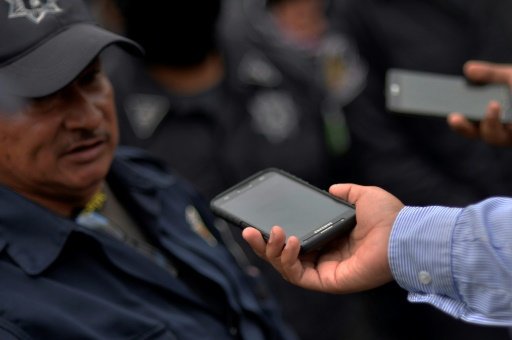 CHILPANCINGO, MEXICO: After drug cartel thugs kidnapped him and threatened to burn him alive, Mexican journalist Jorge Martinez was so traumatized he couldn’t leave the house.

He and six colleagues were returning home after covering a police operation in the violent southern state of Guerrero on May 13 when some 100 masked gunmen from La Familia cartel hijacked their cars.

The narcos ended up letting them go after about 15 minutes. But it took Martinez, 44, two weeks to go outside again.

“Maybe it’s just nerves, but I feel like people are following me,” he almost whispered into the phone at the time, afraid to come out for an interview.

Two days after the kidnapping, another journalist — noted crime reporter and AFP contributor Javier Valdez — was shot dead in broad daylight in the state of Sinaloa, scene of some of Mexico’s most brutal drug violence.

It was one of the highest-profile attacks targeting journalists in Mexico — a country where the phenomenon has become almost banal.

Journalists face harrowing risks to cover the bloody wars between Mexico’s rival cartels and the army, which have left a trail of tens of thousands of mangled bodies and hundreds of mass graves in their wake.

Reporters take their lives in their hands when they write anything that could be perceived as threatening, or even unflattering, by narcos or the corrupt government officials in bed with them.

Watchdog group Reporters Without Borders ranks Mexico as the most dangerous country in the world for journalists after Syria and Afghanistan.

Since 2006, when the government first sent the military to fight the cartels, nearly 100 journalists have been killed, more than 20 have disappeared and more than 200 have been assaulted by drug traffickers.

For survivors, the scars are not always visible.

For some, it is because they have been victims of the violence. For others, it is the impact of bearing daily witness to it.

A study last year involving 246 journalists found that 41 percent had PTSD symptoms. Seventy-seven percent had symptoms of anxiety, and 42 percent of depression.

Alejandro Ortiz is a 26-year-old reporter for W Radio in Chilpancingo, the capital of Guerrero and a hot spot in Mexico’s war on drugs.

Dark and muscular, he smiles nervously as he tells stories about the four times he has been attacked by cartel thugs.

He’s been kidnapped, tied up, beaten and had a gun put to his head. He suffers recurring nightmares and anxiety. But he says he’s determined not to let the narcos win.

“We all know being a journalist is a high-risk profession in Mexico. Being one in Guerrero is that much worse,” he told AFP.

Reporters here earn as little as $150 a month.

Eric Chavelas, the leader of a local journalists’ association, estimates 30 percent of his colleagues suffer from PTSD.

“We’ve been sounding the alarm for years. We don’t know where to turn” for psychological help, he said.

Experts say most journalists with PTSD do not get treatment.

Ezequiel Flores, a 40-year-old correspondent for the newsweekly Proceso, had to stop reporting on the ground after being roughed up and receiving death threats.

He used to cover the region around Iguala, where 43 students were abducted in 2014 by corrupt police who are accused of handing them over to drug gang thugs who allegedly massacred them.

The government has created a protection program for threatened journalists, but it has failed to stop the violence. Five journalists have been killed this year.

Sergio Ocampo, another of the journalists kidnapped on May 13, scoffs at government protection measures like panic buttons and bodyguards.

A 60-year-old veteran correspondent for AFP and newspaper La Jornada, Ocampo has been paralyzed on the right side of his face since the kidnapping.

His doctor, unable to find a physical cause, diagnosed it as psychological trauma.

“They were about to kill us between two army checkpoints,” said Ocampo, straining to get his words out.

“So what good are protective measures going to do?”