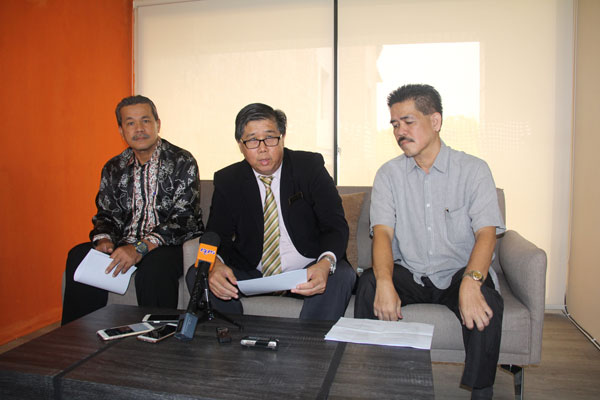 Ong (centre) speaking during the press conference as Azman (right) looks on.

“This championship will attract many athletes from Sarawak especially those who have contributed to the state and country before, such as Watson Nyambek.

Ong, who is also Sarawak State Sports Council (MSNS) director, pointed out that the Miomac would serve as a platform in providing opportunities to athletes who were less prominent during the Sukan Malaysia (Sukma) to realise their potential in athletics.

At the same time, the championship is also in line with the government’s agenda to encourage a healthy lifestyle through sports among the community here.

“We are focused on developing Sukma athletes age 21 and below but less prominent and veteran athletes will also be given the opportunity.

“The power in sports should not be referred to Sukma athletes only as developing athletes who are 31 years and above is equally important,” he reiterated.

On another matter, Ong said Sarawak would bid to become the host for the 21st Asia Masters Athletics Championships in 2019.

“This international championship is expected to see 1,500 athletes from 30 countries converge at Stadium Sarawak,” he said.

He said SMAA, which was officially established on May 26 this year, played a crucial role in caring for the welfare of athletes ages 35 and above.

“We know SSC and MSNS have a lot of responsibilities and so, with the establishment of SMAA, we can now join hands in helping to find new talents in athletics.

“Sarawak is a great sporting powerhouse but unfortunately our athletes are lacking the opportunity to showcase their talent,” he remarked.

On Miomac, Azman said the championship would serve as a great platform for veteran athletes to showcase their respective talents and contribute to the state’s sports tourism sector.