Sunday, July 5
You are at:Home»News»Sarawak»EC confirms cancellation of Pujut by-election 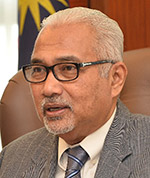 KUCHING: The Election Commission (EC) has decided there will not be any by-election for Pujut, following the decision by the High Court here to reinstate DAP’s Dr Ting Tiong Choon as Pujut assemblyman.

Its chairman Datuk Seri Mohd Hashim Abdullah today said the EC would abide by the court’s decision and it was taking follow-up actions in line with the ruling, including scheduling a special meeting.

The EC had previously fixed June 20 and July 4 respectively as the nomination and polling dates for the by-election.

“The EC will hold a special meeting on this to finalise our decision regarding those dates which were fixed by us,” he said in a statement from Putrajaya.