Saturday, August 15
You are at:Home»News»Sarawak»State government keen to promote RFF 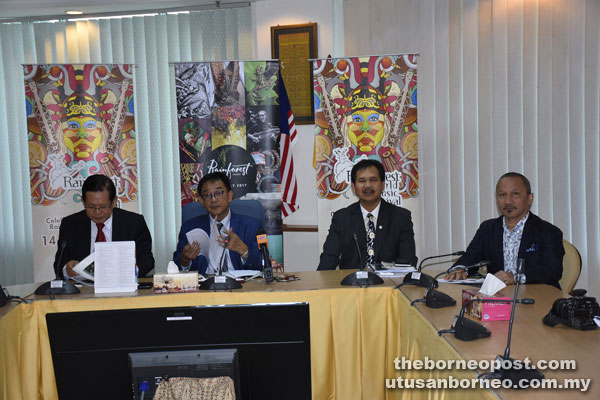 Karim (second left) at the press conference in his office with Ik Pahon (right) and Lee (left).

KUCHING: The state government is keen to add to Sarawak’s calendar of tourism events to make Sarawak a more lively place.

Speaking at a press conference in his office yesterday, Tourism, Arts, Culture, Youth and Sports Minister Datuk Abdul Karim Rahman Hamzah hoped for more such annual events in Sarawak which is rich in arts, culture and nature.

Presently Sarawak’s annual Rainforest World Music Festival (RWMF) attracts tourists from around the world, but the government is promoting a new festival that can do the same, namely the Rainforest Fringe Festival (RFF) to be held at the The Old Court House, Sarawak Tourism Complex.

“RWMF has proved to be a success and I think it’s time for us to introduce another festival. This year the RFF will be held in the heart of Kuching city,” he added.

According to Karim, RWMF is a music festival while RFF promotes and celebrates Sarawak arts and culture, artists and artistes.

He believes the inaugural RFF will be a platform for Sarawakian artists and artistes to showcase their talent.

“RFF will reflect Sarawak’s rich identity when it is held here (in Kuching) next month from July 7 to 16. Those interested in arts and culture should take time to check out this festival,” he said.

He believes Sarawakians have a lot to offer in terms of arts and culture, and the state government welcomes anyone wishing to promote them.

The highlights of the RFF next month include an evening concert that features an eclectic mix of Sarawak’s local talent as well as an array of homegrown artists to present their work at The Old Court House, Sarawak Tourism Complex.

A fashion gala at The Waterfront Hotel will demonstrate Sarawak’s strength in generating quality fashion, textures, accessories and many more.

Organisers of the RFF hope to bring to Sarawak a deluge of visitors from all corners of the world to experience a cultural experience like no other.

“The RFF which is all about Sarawak encourages not only international visitors but locals to appreciate and share the manna the Land of the Hornbills has to offer,” said festival director Joe Sidek at the press conference.

A festival guide and details on event registration are available at www.rainforestfringe.com and on their Facebook page.