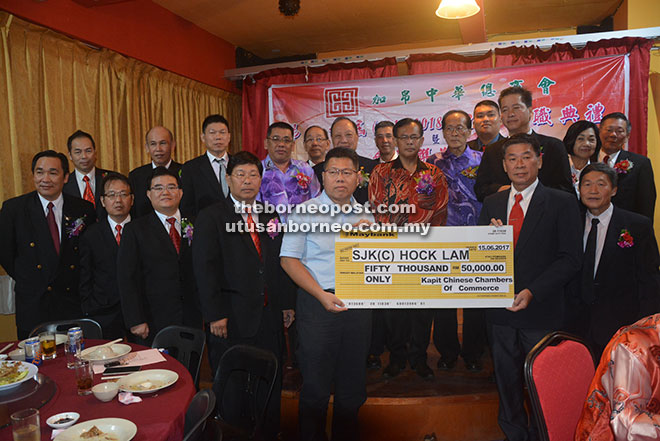 Yiap (right) handing over the mock cheque to Wong as other committee members look on. Jefferson is at the second row, sixth left.

The ceremony coincided with KCCC’s 22nd office bearers installation-cum-membership dinner held at a local restaurant that was attended by about 180 members. The term for the new office bearers runs from 2017 to 2018.

KCCC president Ling Hung Pin when contacted said SJK Hock Lam is building a three-storey classroom block with the work almost completed. The cost of construction is RM1.5 million. The school has conducted various activities to raise funds for the new classroom block.

“The chamber is performing our corporate social responsibility to help the school. After all, this is the only Chinese aided primary school in the district where pupils have the opportunity to learn Mandarin.

“Although it’s a Chinese school, out of its seven hundred pupils, almost 50 per cent are Bumiputera. We all have a role to support the school. Today we donated money. Previously, we also sponsored computers for the school so that pupils have a chance to learn,” Ling said.