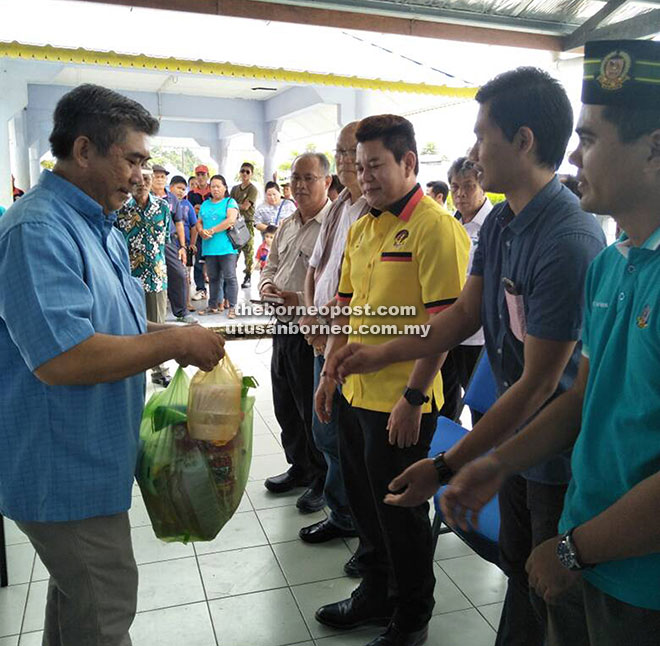 SRI AMAN: Repair works on Masjid Kampung Melayu Engkilili, including the installation of the air-conditioning system, will commence once the government grant of RM100,000 is ready, says Engkilili assemblyman Dr Johnichal Rayong Ngipa.

According to him, the government also considers undertaking pipe-laying projects at the lower and upper Skrang and also lower Batang Ai, aimed at facilitating the supply of treated water to the rural folk.

“In addition to this, the Delok-Entimau-Lanjak strip in Upper Batang Ai in Lubok Antu is set to receive some development projects that would benefit the people there, particularly those at the Skrang Resettlement Scheme,” he said prior to distributing ‘bubur lambuk’ to the locals near Engkilili bus station yesterday.

It is known that the Skrang Resettlement Scheme house  those who migrated from Delok and Upper Batang Ai during the Indonesia-Malaysia Confrontation in the early 1960s.

Some of the early Skrang Scheme resettlers were also present at the ‘bubuk lambuk’ distribution yesterday, together with the Sri Aman and Engkilili members of People’s Volunteers Corp (Rela) as well as those from the Engkilili branch of Sarawak United National Youths Organisation (Saberkas), of which Rayong is the chairman.

The distribution was run by officers from Lubok Antu District Office, Sarawak Forestry Corporation and other local government agencies.