Friday, June 25
You are at:Home»News»Nation»Malaysia targets reducing smokers to 15 per cent by 2025 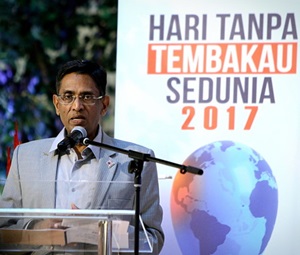 KUALA LUMPUR: Malaysia is targeting to lower the total number of smokers to 15 per cent of the population by 2025 and to only five per cent by 2045, in line with the target of a smoking-free nation.

Health Minister Datuk Seri Dr S. Subramaniam said towards meeting the objective, the ministry would be intensifying efforts to empower and promote overall health to assist smokers to kick the unhealthy habit.

He said the government had carried out various initiatives such as raising the excise duty on cigarettes, putting health warning on cigarette packs and banning smoking in almost all public places to combat the bad habit.

“We hope the people will heed the message seriously and cooperate with the government to produce a smoking-free nation,” he told reporters after launching World No Tobacco Day 2017 here on Tuesday.

The World No Tobacco Day is marked on May 31 to raise community awareness on tobacco products which are detrimental to health.

The National Health and Morbidity Survey in 2015 showed that 22.8 per cent or five million Malaysians aged 15 and above are smokers with the majority men, who made up 43 per cent of the group actively contributing to the national economic growth.

On average, Malaysians spent about RM178 a month on cigarettes, he said.

“Imagine how much Malaysians would save if they stopped smoking,” he added. – Bernama