Tuesday, October 26
You are at:Home»Lite Stories»Unpacking the mystery of wobbly suitcase syndrome 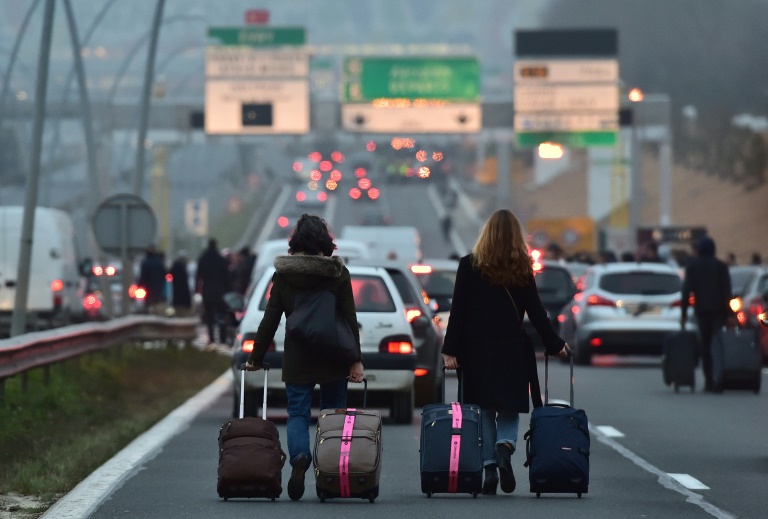 Tens of millions of travellers suffer the annoyance of wobbly suitcases every day. AFP photo

PARIS: You are rushing to catch a train or plane and suddenly the suitcase you’re pulling starts to rock from wheel to wheel, threatening to flip over.

Tens of millions of travellers suffer this annoyance every day, but up to now, nobody could say exactly why.

Perhaps a bit of each, but the underlying cause lies elsewhere, according to a study published Wednesday in the no-nonsense Proceedings of the Royal Society A: Mathematical and Physical Sciences.

“The tendency of a two-wheeled suitcase to oscillate from one wheel to another is due to an inherent mechanical instability,” explained senior author Sylvain Courrech du Pont, a researcher at the Complex Materials and Systems Laboratory of Paris-Diderot University.

More precisely, the in-built unsteadiness arises at the intersection of types of motion, simulations with toy-scale models and theoretical calculations showed.

“The problem is the interaction” — the clash, in other words — “of rotational and translational motion,” Courrech du Pont told AFP.

“It may seem paradoxical, but it is precisely because the suitcase is designed to roll in a straight line that it moves sideways.”

Rotational motion occurs when an object, such as a wheel (or two), spins around an axis in a continuous way.

Translational motion involves sliding an object — in this case, the whole suitcase — in any direction.

“The wheels constrain the suitcase to roll in a direction that is perpendicular, or at a right angle, to the axis on which the wheels are turning,” Courrech du Pont explained.

There is little tolerance for deviation: a sharp change in direction while walking briskly, or a wheel hitting a bump and lifting off the ground, is enough to make the suitcase tip from wheel to wheel.

The same kind of rocking oscillations can occur with any two-wheeled vehicle in which the wheels are on the same axis, such as a hand-truck or a trailer pulled by a car.

What to do? There are two options, according to the study.

One is to stop, stabilise, and start again.

But the suitcase — in theory — will also regain stability if wheel rotation speeds up, though running in an airport may carry risks of its own.

How did this interplay of two basic physics axioms go unnoticed for so long?

“I really don’t know,” said Courrech du Pont, who set up the experiments as a classroom project for his third-year university students.

“Earlier efforts to study this problem only looked at the motion of a solid block, so they missed the coupling,” he said.

Only when he set about preparing a bibliography did he realise that no one had cracked this particular nut.

“The world is full of simple problems like this that are not solved,” he added. – AFP