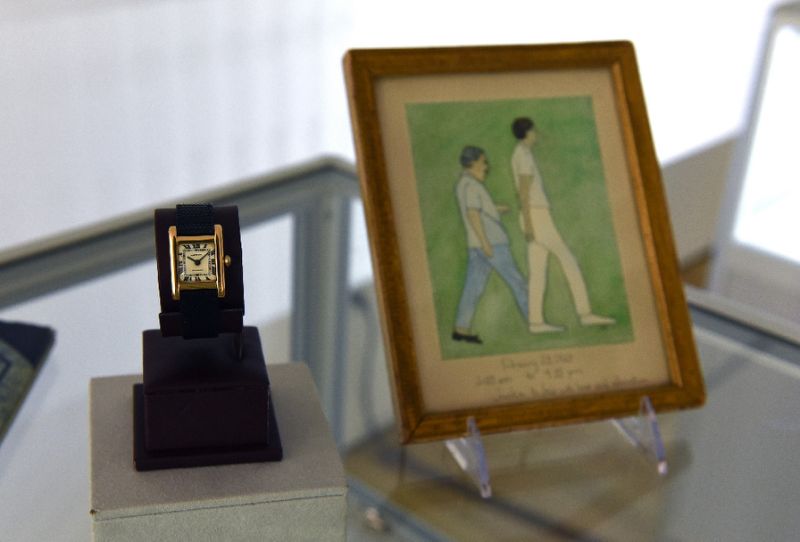 An engraved Cartier watch belonging to Jacqueline Kennedy Onassis and an original painting by the former first lady are displayed at Christie’s in New York. AFP Photo

NEW YORK: An engraved gold Cartier watch given to Jacqueline Kennedy and a reciprocal thank-you painting from the former first lady sold for $379,500 (approx. RM1.6 million) at an auction in New York on Wednesday, Christie’s said.

The Tank watch was given to Kennedy by her brother-in-law, Prince Stanislaw “Stas” Radziwill, in February 1963 to commemorate a 50-mile hike in Palm Beach championed by former president John F. Kennedy in a drive to make Americans fitter.

In exchange the first lady gave Radziwill a painting she made of him and Chuck Spalding, a close friend of the president’s, with the dedication: “February 23, 1963 2.05am to 9.35pm / Jackie to Stas with love and admiration.”

Kennedy was often photographed wearing the watch, which smashed pre-sale estimates of $60,000 to $120,000, together with the painting, to sell after three minutes of bidding and more than a dozen individual bids, Christie’s said.

“In 20 years I’ve been selling watches, I’ve never seen so much excitement,” John Reardon, international head of watches at Christie’s, told AFP ahead of the sale.

“Many of the most iconic photographs of her, you can see the Cartier Tank in the corner of the picture on her wrist,” Reardon said.

The identity of the buyer was not immediately disclosed, but Reardon said potential buyers from Asia, Europe and the United States expressed interest in having “a little piece of Camelot to put on their wrist.”

He described the condition of the more than 50-year watch as “extraordinary considering its age” and said its current strap had been worn by Kennedy.

“She preferred to wear a lizard strap, when she had this piece on her wrist for decades, and this is the actual strap that she wore for many years,” he said.

Kennedy is one of America’s most iconic first ladies, remembered for her style, elegance and sophistication. Plunged into mourning by her husband’s assassination in 1963, she later married Greek shipping mogul Aristotle Onassis.

Radziwill was an emigre aristocrat who escaped from the German invasion of Poland at the end of World War II and later married Jackie’s sister, Lee. – AFP