Saturday, August 15
You are at:Home»News»Sarawak»Bidayuh museum in the offing at DBNA ‘baruk’ 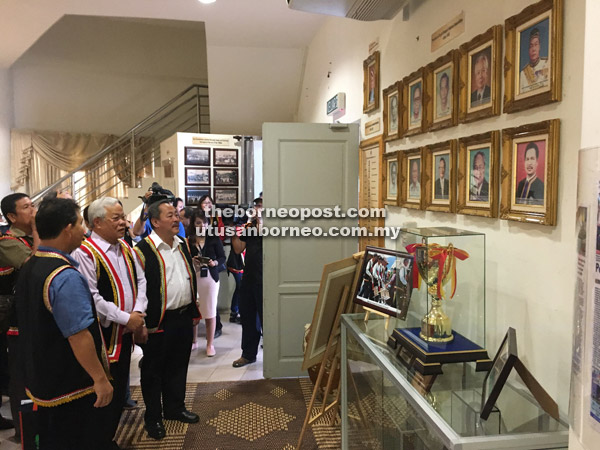 Manyin (second left) and others view the exhibits in the museum after the soft opening.

KUCHING: The public can learn more about the Bidayuh community once the museum at the Baruk in Dayak Bidayuh National Association (DBNA) headquarters here is fully ready by end of this year.

He said visitors to DBNA and the restaurant located within its headquarters can visit the museum soon, especially for those who want to do research on the Bidayuh community.

“One of the purposes for this Baruk was  as a collection centre for culture and heritage of the Bidayuhs. In the past two to three years, we have been looking at all our files and archives, to see what are the relevant documents that are relevant to DBNA which we can exhibit, and we have also set up a special committee on this.

“The DBNA museum is more pictorial (in its presentation), to relate how we started in 1955, who were the leaders then, the programmes and activities done by them and how we have progressed,” he told reporters when met during the DBNA’s triennial general assembly yesterday.

He revealed plans to expand the content of the museum to include map showing the population and demographic distribution of the Bidayuh, as well as to feature photos and biodata of successful members of the Bidayuh community.

“This is so that anybody coming to DBNA can have a glimpse of the general population and the villages of our community. We are also looking at featuring those Bidayuhs who have contributed in politics, social, economy, sports and performing arts/ entertainment.

“These high achievers including our Olympiad Pandelela Rinong and Miss Malaysia/ World Dewi Seriestha are the pride of the community and we want to motivate the younger generation,” he said.

Due to the small space of the Baruk, he explained the museum’s content will be more pictorial and filled with graphic design. “Hopefully by end of this year, we will have a much better, comprehensive and educational museum in the Baruk,” he added.

On a related matter, he said DBNA was looking forward to items collected by others which may have historical value to the Bidayuh community.

He said some non-Bidayuhs may have antique items and photographs in their collection. “Maybe they can share those items with us, or we buy from them,” he added. 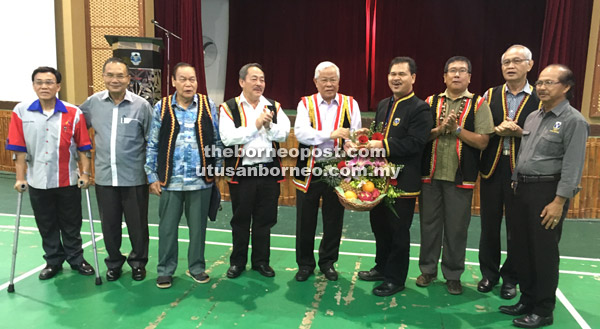 Ik Pahon (fourth right) presents a memento to Manyin after the TGA opening.