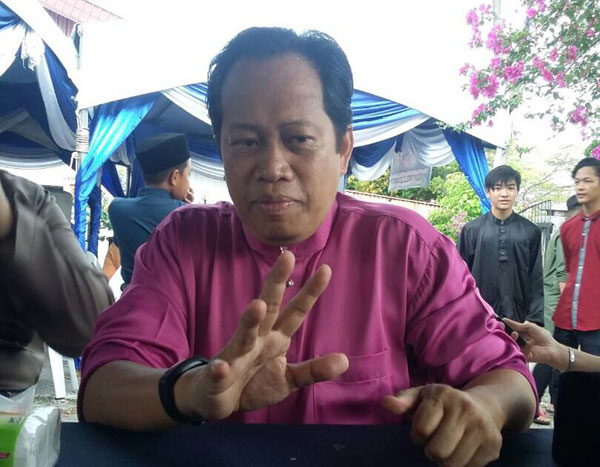 He explained that traders should have been claiming the SST sum that was put against their old stock and not maintaining the 10 per cent to become part of their profit.

“The enforcers of the Ministry of Domestic Trade, Cooperatives and Consumerism (KPDNKK) should catch some of the profiteers, prosecute them and secure convictions so that their cases can be used as stern reminders to other would-be profiteers,” he said, adding the media should then highlight these cases in their respective medium.

Consumers, too, could play an active role in combating profiteering by exercising their power to choose not to buy items with unreasonable pricing, boycott services with unreasonable pricing, and report suspicious and unscrupulous traders to the authorities, he said when met at his and wife Datin Noraini Sulaiman’s Hari Raya Aidilfitri open house at Kampung Siol Kandis, Petra Jaya here yesterday.

When explaining why prices of most goods are still high despite the elimination of the SST and implementation of the GST, Ahmad said: “There was a little bit of traders taking advantage of desperate consumers, a little bit of economic sabotage and a little bit of ignorance (of both traders and consumers on taxation). If they (consumers) simply buy the goods, there is a good chance they become victims of profiteering.”

On lack of enforcement, he explained that the numbers game does not favour the authorities since there are probably only 4,000 enforcers against 1,500,000 traders nationwide.

“To combat profiteering in society, there must be some element of education and that traders must also be ethical to be able to assist the government in reducing prices of goods and services.

“On top of that, the enforcers must catch offending traders, prosecute them and use their cases as a reminder to others. Otherwise they all will be taking things for granted,” he said adding that in theory, the implementation of the GST should have contributed to decreasing prices of goods and services.

On another matter, Ahmad said the elimination of the cabotage policy in the transportation sector should, in theory, contribute to the decreasing of prices of goods and services in the market.

Therefore he supported the elimination of the cabotage policy because it was a factor which contributed to the increase in prices of goods and services, thereby burdening consumers.

Ahmad, who is Pontian MP, said multi-racial Sarawak is a model for the 1Malaysia concept which the federal government has been promoting all this while.

This makes open houses for any festivity in Sarawak merrier and livelier, he added.