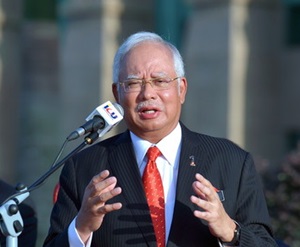 Malaysia’s collective efforts in combating human trafficking locally and regionally was bearing fruit as the country improved its position in the international Trafficking in Persons Report 2017, Najib wrote on his Facebook posting.

In the 2017 report published by the United States State Department, Malaysia has been upgraded to Tier 2 from Tier 2 Watch List in the 2016.

“Well done to those who have worked tirelessly to achieve this. We remain committed to stopping trafficking, protecting the victims and prosecuting the traffickers,”said Najib.

Tier 2 was accorded to the governments of countries that do not fully meet the Trafficking Victims Protection Acts minimum standards but are making significant efforts to bring themselves into compliance with those standards.

According to the report, the Malaysian government demonstrated increasing efforts compared to the previous reporting period, which enabled it to be upgraded to Tier 2.

Malaysia targets to attain Tier 1 status in the Trafficking in Persons Report 2020. — Bernama