Wednesday, February 19
You are at:Home»News»Sarawak»Dr Sim: Don’t panic over outbreak of rabies in Serian 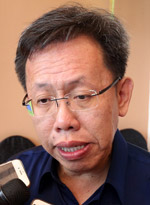 KUCHING: There is no need to panic over the recent outbreak of rabies in Serian, says Minister of Local Government and Housing Datuk Dr Sim Kui Hian.

According to him, a meeting was held earlier yesterday between state  Health Department, Department of Veterinary Services, Sarawak Society for Prevention of Cruelty to Animals (SSCPA), local councils and other related non-governmental organisations to prevent the disease’s spread.

“We have to get the involvement of everybody and the first task by the committee is to contain the disease and conduct vaccination,” Dr Sim told reporters at a Hari Raya Aidilfitri open house hosted by Minister of Tourism, Arts, Culture, Youth and Sports Datuk Abdul Karim Rahman Hamzah at Dewan Bahasa dan Pustaka here.

He said SSCPA had conducted two workshops on rabies awareness over the past two to three years.

The Health Department and the Department of Veterinary Services had also carried out simulations on approaches in combating rabies over the past year.

“Rabies have actually been around for years. It’s not something that had fallen from the sky,” said Dr Sim, who is also Batu Kawah assemblyman.

A child suspected to have been bitten by a dog may show ‘strange’ behaviour such as being scared of water and should be immediately sent for medical attention. Such a child might be reluctant to inform parents or guardians for fear of being scolded.

Carriers of rabies are not just dogs, but also bats and rats.

On another note, Dr Sim is uncertain about the health status of the three children from Serian who have been warded at the Intensive Care Unit of Sarawak General Hospital since Friday.

The children are confirmed to have contracted the disease after the results of tests were released on Friday.