Wednesday, July 6
You are at:Home»News»Sarawak»Mr Bean brings joy, laughter to over 1,000 pupils 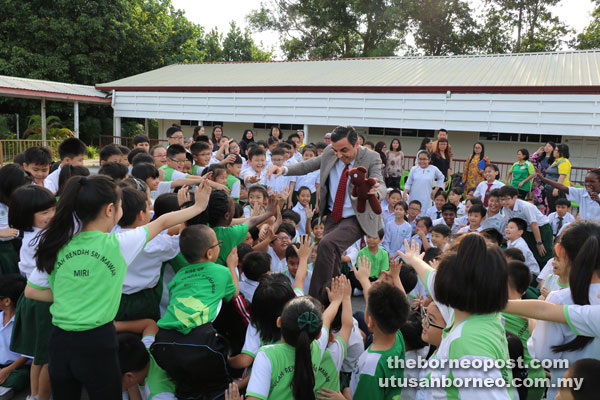 Pupils of SK Mawar are overjoyed with Luari’s impersonation of Mr Bean. 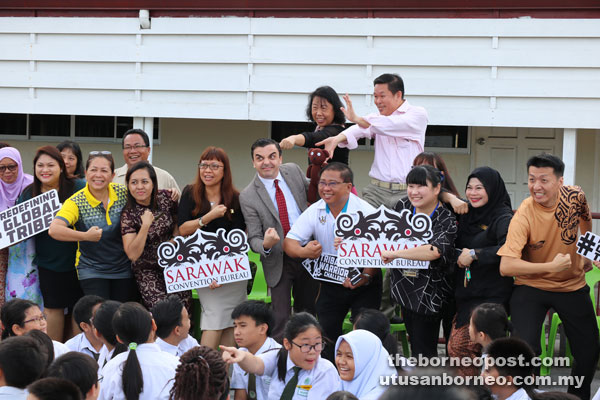 (Second back row – from third right): Goh, Luari, Roslawati (right), representatives of the organisers, and teachers give the warrior’s act.

The morning session of both schools were a totally different learning opportunity with the presence of the affable Lauri who effectively imitated the funny acts of Mr Bean, including skills in drawing the caricature of the famous movie actor and comedian.

The 306 pupils of SK Sri Mawar who were sitting in the open space of the school compound were glued to their seats.

They giggled and laughed throughout  Mr Bean’s one-hour performance starting at 7.30am.

When the  performance   finished, they rushed to shake hands with him while many others tried to ask for his autograph. If not for the strict school rules, Luari would have a hard  time meeting  their  demands as he  not  only signed but drew  caricatures  of Mr Bean.

The autograph session for the lucky few (less than ten and a teacher on behalf of her daughter)   was made possible only following  a request from Councillor Ernest Goh, the Miri City Council’s tourism development standing committee chairman after hearing one of the pupils saying to their teachers ‘we want him to sign our autograph, it is really a chance of a lifetime for us today, please’.

The surprise appearance of Mr Bean at the two schools was organised by the Sarawak Convention Bureau in collaboration with MCC as part of their outreach project and corporate social responsibility (CSR) programme with the support of non-governmental organisation – The Giving Bank and Minda Travel.

It was part of efforts to promote Miri as a Meetings, Incentives, Conferences and Exhibitions (MICE) destination.

Olivia Ho who is the wife of Albanian-born  Luari; Goh, representatives of the organisers and SK Sri Mawar headmaster Roslawati Ahmad were also present at the event.

Roslawati thanked the organisers for selecting her school for the special performance, which she said should be encouraged to add merriment and effectiveness to the teaching and learning environment.