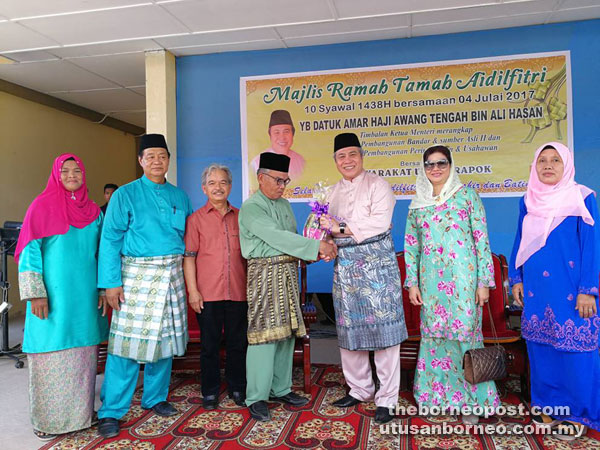 Awang Tengah (fifth left) receives fruits and local delicacies from a village representative in Ulu Merapok as Dayang Morliah (second right) and others look on.

LAWAS: The state government has lined up a series of infrastructure and services improvements for Ulu Merapok in its rural transformation and economic development programme, which requires the people’s support to make it a success.

He said Merapok had steadily progressed over the past decades but much more needed to be done to transform this rural area bordering Sindumin of Sabah.

He appealed to the people of Ulu Merapok to beautify their landscape and villages to make them attractive to visitors, which could spur tourism and homestay programmes that would create other economic spin‐offs.

He noted that emphasis is currently given to upgrade the local water supply by connecting the villages with a reticulation system instead of the present gravity feed system, which is unreliable.

“Priority will be given to the reticulated water supply system, SK Ulu Merapok replacement and the mini service centre with a tuckshop for cottage industries and government departments in Ulu Merapok,” he said.

Also in the pipeline are village extension programmes to cater for demand and encourage  socioeconomic uplifting through assisted marketing initiatives by the government to support agricultural activities.

Embas is spearheading this move to market certain products as part of the drive to lift up the rural economy in the state.

Awang Tengah said a holistic approach in Native Customary Rights (NCR) land development in Ulu Merapok is necessary and alienation of formal boundaries of the respective communities is vital to avoid future conflicts among succeeding generations.

“Presently, only the elders know the actual boundaries but this could be problematic later when they have passed on, and that is why formal land boundaries need to be settled so that they would not face such problems later,” he said.

Awang Tengah, who is also Second Minister of Urban Development and Natural Resources and Bukit Sari assemblyman, said Merapok is close to his heart and it is a harmonious society of different religions, culture and background such as the Kedayan,

Lun Bawang, Tagal and other races.

“Solidarity among the people of different communities in Ulu Merapok is admirable, and it is the cornerstone of the many successful activities organised here,” he said.

He also commended the locals for their self-reliance, cooperation and harmony which had made Ulu Merapok unique.

He said this culture and spirit must continue to be upheld.

On his appointed as Deputy Chief Minister, he said he had not expected it and pledged to give his best to assist Chief