Thursday, August 6
You are at:Home»News»Sarawak»Eight compounded RM500 each for littering 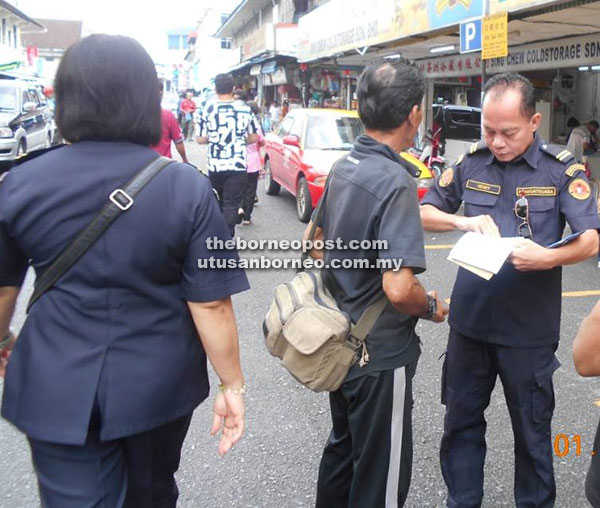 SMC enforcement officers meting out action on a member of the public for alleged littering.

SIBU: Sibu Municipal Council (SMC) has acted on eight cases of littering between July 1 and July 3, with two of the offenders having paid the RM500-compound so far.

The council has increased the compound for littering from RM20 to RM500 since July 1.

Banners and signboards have been put up at various locations to inform the public of the RM500 compound for littering.

Council chairman Datuk Tiong Thai King, meanwhile, said  that the anti-littering campaign in schools, low compound fees, ‘No Plastic Bag’ policy and others seemed to have had low impact on the people’s attitude towards littering.

He said the council now has CCTV cameras at various points to capture the act of littering.

Meanwhile, Assistant Minister of Local Government Datu Dr Penguang Manggil has suggested that heavier compound against litterbugs would be enforced without fear and favour.

Nonetheless, he believed that the punitive measure was the least necessary if people could change and emulate the mindset and attitude of those in Western countries such as Switzerland and Norway, where conservation and protection of the environment is a collective responsibility.

Previous Article‘Aid to be given to rabies victims’ family’
Next Article Fatimah: Ministry always supportive of fundraising activities