Saturday, July 24
You are at:Home»News»Sarawak»Nurture cultures and traditions in children, urges assemblyman 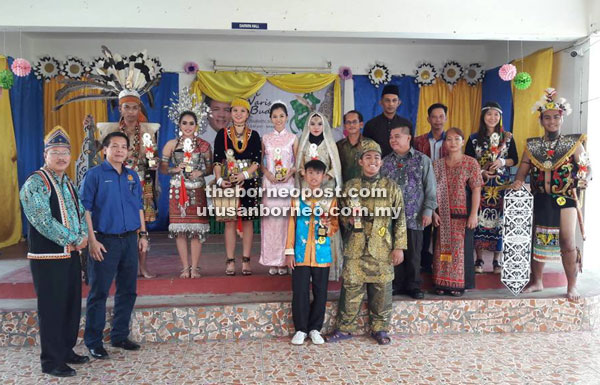 Kok and Dennis (first and second left respectively) with top winners of the ethnic dress competition.

MIRI: Cultural norms and traditions should be nurtured and inculcated in children at a young age in order for them to appreciate its importance and significance.

Telang Usan assemblyman Dennis Ngau stressed that it is important for the younger generation to know their cultures and traditions in a multi-racial and multi-religious society.

“Knowing their culture and tradition will build their self-confidence and they will assimilate better with other members of the community, “ he said at the launch of Sekolah Menengah Kebangsaan (SMK) Pujut, Miri Heritage Day 2017 recently.

“The effort to hold this event at school level will certainly build the current and future generations towards civic cohesiveness and it is especially important in a state and country made up of multi ethnic society.

“This celebration enables students to learn more about other cultures and will also ensures the cultural heritage is being preserved as we have been known to live harmoniously and I can assure events like this helps in nation building of our beloved Malaysia,” he added.

Dennis said their forefathers still managed to build longhouses or villages which in turn became town and later cities, despite not going to school or attaining higher qualification because the past generation had high respect for their custom (adat).

“Respecting the ‘adat’ was their cornerstone for progress as it means even if one attains the best qualification or job one day, he or she must never forget the importance of his or her root, so I hope every student will understand the sacrifice done by the people that want the best for all,” he explained.

He added that the National Heritage Act which was passed by Parliament in 2005 covers national heritage, natural heritage, tangible and intangible cultural heritage, underwater heritage and other matters pertaining to inheritance.

“The tangible heritage includes historical sites, areas and natural formations such as mountains, beaches, trees, rivers, hills, buildings, decorative items or arts, handwriting, handicraft on woods or metals, weapons and anything that could be seen which holds traditional values.

“Intangible heritage meanwhile are like music, dance, language, sounds, living practice and any other things done by human being in the process of cultivating life,” he said.

Dennis commended the State education department for organising programmes that could introduce the students to the Nation’s cultural heritage and instil the love of the cultural art in students.

Various activities including traditional dress contest were held throughout the day. The event was attended by the school’s principal Kok Chee Kiat, Parent-Teachers Association chairman Albert Bangau Pengarah, councillor Dominic Nyurang, school staffs and more than 1,000 students of the school.