Abg Jo: Ministry to get bigger budget to create more awareness of the public health concern 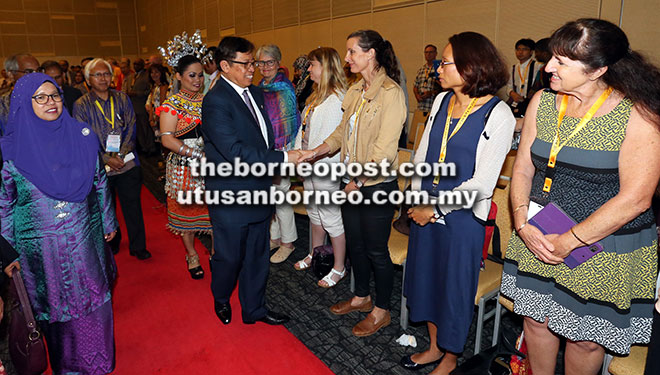 Abang Johari greeting the delegates upon arrival at the function.

KUCHING: Chief Minister Datuk Amar Abang Johari Tun Openg says the government will increase the allocation to the Ministry of Welfare, Community Well Being, Women, Family and Childhood Development to create awareness of mental health problems among the people.

He said although the number of cases of suicide in the state was not serious, there was a trend towards that in view of changing lifestyles which could cause anxiety and depression, and eventually lead to suicide.

“I would like to urge academicians and professionals to conduct more research on suicidal behaviour in the state to give us a clear picture of the extent of this problem in the state, and therefore there will be an increased allocation to the Ministry (Welfare, Community Well Being, Women, Family and Childhood Development).

“So therefore, there will be an increased allocation of at least five per cent, and not directly to prevent suicide but to create awareness and how to manage our lifestyle,” Abang Johari told a press conference yesterday.

Earlier, he officiated at the 29th World Congress of the International Association for Suicide Prevention (IASP) and the 21st Malaysian Conference on Psychological Medicine (MCPM) at Borneo Convention Centre Kuching (BCCK), here.

Some 550 delegates from 40 countries are attending the five-day event from July 18 until 22.

Abang Johari lauded the congress as it would give insight on how to address the worrying pattern of suicidal behaviour among the people.

In his speech earlier, Abang Johari pointed out that attention would be given to programmes to improve mental health and address suicidal behaviour.

“That would involve an appropriate allocation of the budget for all aspects of mental health promotion, especially among school children and building resilience among them,” he pointed out.

He said mental illness also affects social and occupational functions and productivity, adding that mental illness and suicide not only cause emotional pain to the sufferers and caregivers, but also result in economic loss to the nation that may amount to millions of ringgit.

According to him, the latest health and morbidity survey revealed that almost 30 per cent of the Malaysian population experienced mental health problems.

Pointing out that suicidal behaviour is a very distressing matter, he said he was informed that more than 800,000 people worldwide died due to suicide every year.

“Suicide has become a public health concern, one that calls for concerted action about the impact of mental disorders like depression, anxiety and alcohol and drug abuse since these are important contributors to suicide,” he said, and hoped that people affected by the illness and their caregivers will respond to this call and seek early treatment. 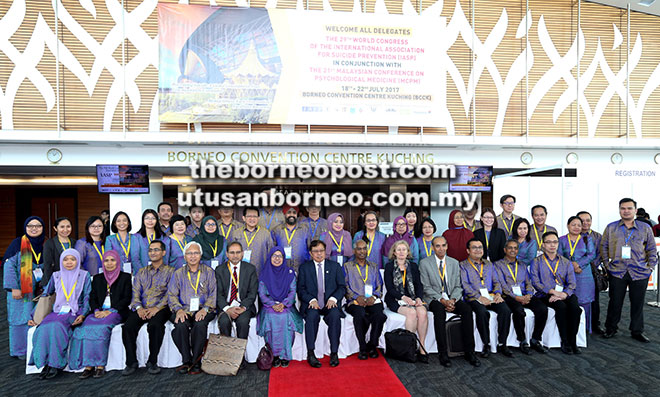 Abang Johari (seated, seventh left) with Dr Nor on his right and Dr Maniam on his left and other delegates in a photo-call outside the conference room. 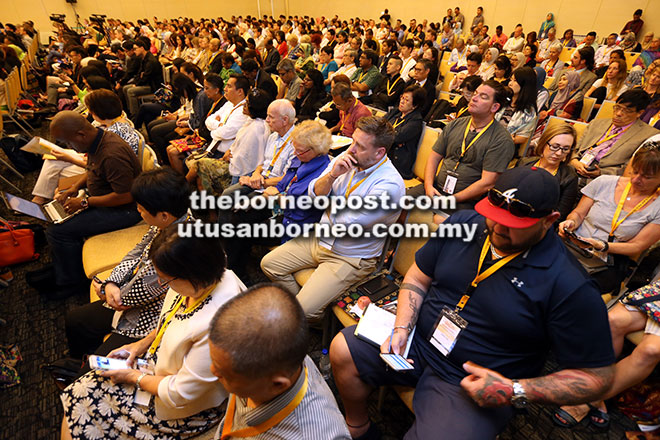 The delegates and participants listening to Abang Johari’s opening address.

He also hoped that adequate training is given to those who help in early detection of mental illness, such as teachers and general practitioners.

The chief minister also said he was concerned about bullying cases which has become a contributory factor for suicide.

He urged parents not to pressure their children to achieve excellent academic results in public examinations, which may result in the children getting depressed.