Sunday, February 5
You are at:Home»News»Sarawak»Haze from Aceh forest fires no cause for alarm yet – Uggah
For the freshest news, join The Borneo Post's Telegram Channel and The Borneo Post on Newswav. 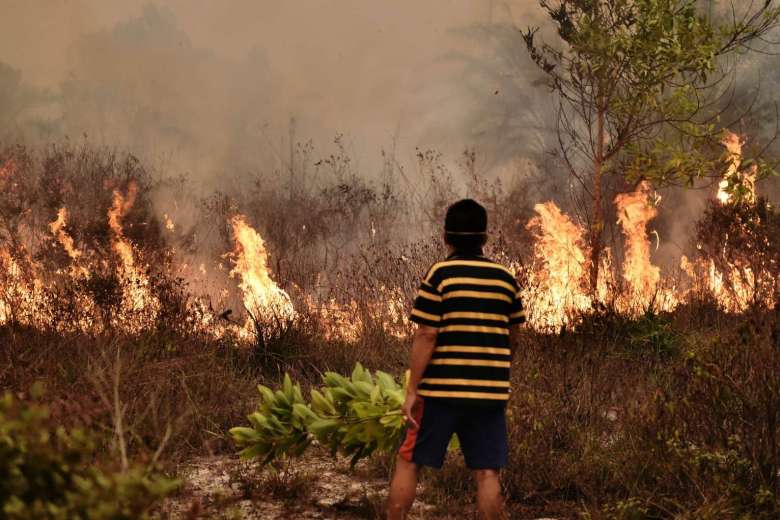 A villager looking at a peatland fire on the outskirts of Palangkaraya city, Kalimantan, on Oct 26. AFP File Photo for illustration purposes

Based on past experience, the southwesterly winds from northern Sumatra blows towards Penang and Thailand.

The southern Sumatran wind is also directed towards Singapore and Johore, he added.

“We should be worried of Bornean fires instead,” said Uggah who is also Deputy Chief Minister, referring to past forest fires in Kalimantan Barat, Indonesia.

“From previous records, no transboundary smoke from Sumatra has crossed over to Sarawak but mostly from Kalimantan. However, we are monitoring the effects of the Aceh forest fires,” Peter said.

The NREB is monitoring the situation in Aceh closely and that of local open burning.

“Transboundary haze is also being dealt with at the SOSEK MALINDO forum and Asean Ministerial Sub-Committee headed by the federal NREB,” he said.

Yesterday evening, Jakarta Post reported that a major forest fire occurred in Acheh and that Kalimantan Barat authorities had readied four fire fighting and water bombing helicopters to counter the spread of the fire.

According to data from the National Disaster Mitigation Agency (BNPB), Johan Pahlawan district was the most affected district with 19 hectares of peatland reportedly burnt while the Arongan Lambalek and Meureubo districts each recorded 15 hectares of burnt land.

Ten hectares were reportedly burnt in Sama Tiga district while five hectares of burnt peatland was reported in Woyla district.

Previous ArticleLeo and Kate will be your date, for the right price
Next Article Trump won’t let Assad get away with ‘horrible’ crimes