Friday, May 7
You are at:Home»News»Nation»Completion of MRT project proves Gamuda’s capabilities 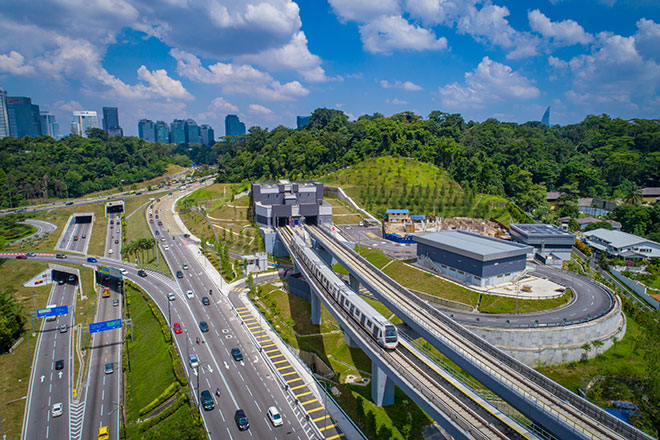 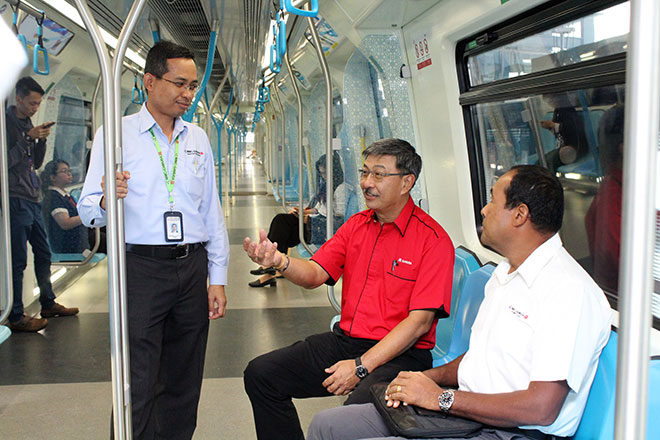 (From left) Ubull, Szeto and Mahadi take a ride on the MRT. 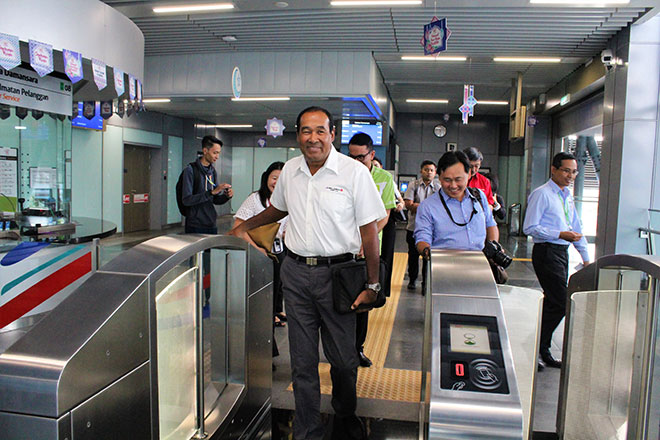 Ubull at the Mutiara Damansara Station eager to take a ride on the MRT. 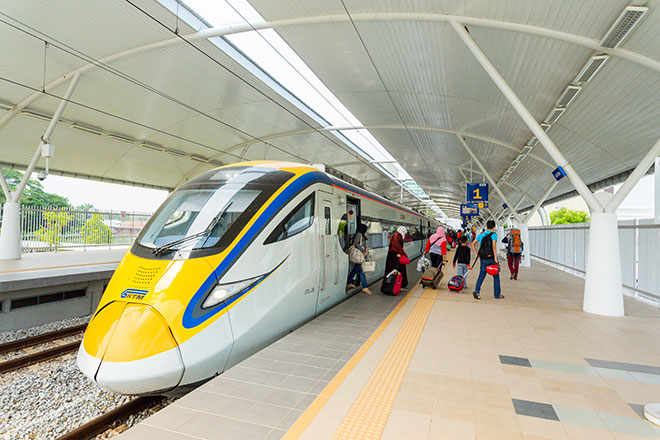 Gamuda was involved in building the Electrified Double Track Project which runs from Ipoh to Padang Besar.

GAMUDA Berhad has proven its capabilities to develop a mass rail transit (MRT) project when the whole phase of the Sungai Buloh-Kajang (SBK) project was completed and ready for public use after it was launched on July 17.

The opening of the SBK route completes the RM21 billion project, which spans over 51km involving 31 stations along its route. Gamuda Berhad through its subsidiary, Gamuda Engineering Sdn Bhd, is already at the forefront of managing major rail projects in Malaysia.

Supported by an excellent record and managing large-scale project developments on schedule, coupled with capabilities in engineering innovation and major solutions, Gamuda is ranked as the leader in obtaining large-scale infrastructure projects planned for the country.

Gamuda is recognised as among the top 30 major listed companies listed on Bursa Malaysia with shareholders including large and reputable institutions such as EPF, KWAP, PNB, and foreign investment funds and has a market capital of RM13 billion.

Managing director Datuk Ubull Din Om said that over the last 15 years, the company has built up its expertise in rail infrastructure through several projects within and outside the country, including the Kaohsiung MRT in Taiwan, nearly 4km; the Ipoh-Padang Besar project; and the latest MRT in the Klang Valley.

He said during the same period, the company also developed the expertise of local workers covering various sets of skills needed to plan and build railway projects.

“These skills include construction management and project planning, design and technical, soil and geotechnical engineering; civil and structural; and systems and electriﬁcation.

Ubull said the MRT was the most complex and challenging project to date.

“We are currently in the process of developing the second MRT project involving the route. Experience in construction and management of SBK MRT has been utilised for the project.

“The SSP route is expected to be more difficult and challenging because 80 per cent of conditions underground involve karst,” he explained.

Despite the complexity of the construction of the MRT project, Ubull said Gamuda has proven its ability to play an important role as Project Delivery Partner (PDP) and underground contractor in completing the SBK route according to the schedule and budget set.

Geotechnical engineering was very important in the construction of the SBK MRT project because it was part of the initial preparation before construction work was initiated, primarily concerning issues of safety underground.

Gamuda Engineering Sdn Bhd general manager for Systems, Mahadi Mahmud said the condition of the land for the SBK MRT project proved to be challenging as the SBK tunnel had to cross the two main landforms of sand and sedimentary rock formation at Kenny Hills and limestone formations in Kuala Lumpur.

According to him, although sand and sedimentary rocks are typical types and easily predictable geological formations found in Kuala Lumpur and the Klang Valley, the limestone formation in Kuala Lumpur is most heavily weathered with empty spaces filled with underground water.“

That’s why the construction of a large tunnel across karst land is a challenging task. Many bitter lessons learned during the construction of the Storm Water Management and Road Tunnel (SMART) project of 9.7km because the diameter is greater for dual-tunnel than the SBK MRT tunnel,” he explained.

“The entire Jalan Bukit Bintang underground route proved to be complicated for testing without any form of trafﬁc diversion as most of the area has been fully constructed.

“Furthermore, the authorities had virtually no records of what was being buried underground such as electrical cables and water pipes.

“When the contractors conducted routine excavations, they were shocked to find electrical cables and water pipes in unexpected spots although advanced equipment had been used to scan the ground for any objects underground,” he said.

Mahadi said as part of best practices, for anomalies or major irregularities detected underground, remedial work would be carried out to stabilise the ground so that the tunnel boring machine (TBM) could easily move through the route.

“Buildings located within tunnel ‘influence zones’ were placed with marker solutions and other automated instruments to help the surveyor determine how much movement was occurring.

“With this information, the level of current and post-mortem settlement through the area could be determined,” he said.

With the completion of the first MRT construction, Mahadi said Gamuda has now proven its ability to develop a fully automated metro system.

According to him, this includes signal and train control systems covering tests and accreditation as well as prevention and detection of infringement and operations control centres.

Gamuda Engineering Sdn Bhd executive director Szeto Wai Loong said despite the challenges faced, the company was able to complete the SBK MRT route on time as well as in accordance with the budget set.

He said this was made possible by the team in Gamuda who used their critical thinking skills to work through the challenges they faced.

“The skills are also now being used for the completion of the SSP MRT and underground works, which are expected to commence in December. “

Malaysians now have the opportunity to use MRT services and enjoy better network connectivity as Gamuda aims to be part of the construction team for other major public transportation projects planned in the future,” he said.

Sarawak Chief Minister Datuk Amar Abang Johari Tun Openg has been quoted in press reports to have expressed his desire to build a light transit (LRT) system that would connect Serian, Kota Samarahan and Kuching.

Although still in the initial plan, he is confident it can be implemented with expertise from local companies.

With its expertise and technology in large scale projects, Gamuda is confident of implementing a similar project in Sarawak.

Currently, Gamuda with Naim Holdings Berhad – Naim-Gamuda JV Sdn Bhd, is building one of the components of the Pan Borneo Highway.

The contract involves construction and enhancing the Pan Borneo Phase 1 from the junction of Pantu to Batang Skrang.

Previous ArticleHaze: No cause for concern yet
Next Article Twitter shares take beating as user growth stalls