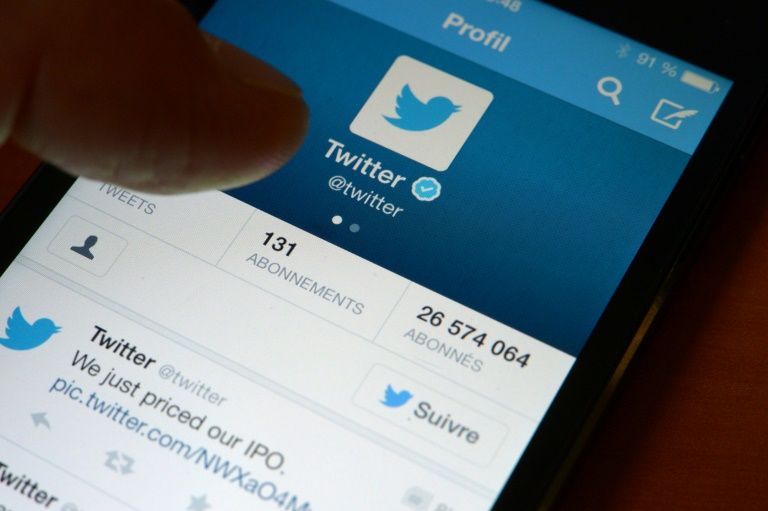 Twitter said revenues in the quarter slipped five percent from a year ago to $574 million, and advertising revenue fell eight percent to $489 million. AFP Photo

Twitter shares took a pounding Thursday after the company reported stalled growth in a key measure of its user base, sparking fresh fears over the future of the social network.

Twitter, which has been struggling to keep pace in the fast-moving world of social media, reported a net loss of $116 million in the second quarter, slightly wider than its $107 million loss a year ago.

More significantly, Twitter reported its base of monthly active users was unchanged at 328 million compared to the first three months of the year and up just five percent from a year earlier.

Twitter said revenues in the quarter slipped five percent from a year ago to $574 million, and advertising revenue fell eight percent to $489 million.

Shares in Twitter sank 14 percent in early afternoon trade to $16.87.

Twitter’s results came in sharp contrast with those of Facebook a day earlier. The world’s leading social network reported a 71 percent jump in profits to $3.9 billion, fueled by growth in ads delivered to its more than two billion users worldwide.

Analyst Trip Chowdhry at Global Equities Research said Twitter’s “fundamentals are broken” and reiterated his view that the messaging service is failing to reach a mass audience, which is hurting its advertising efforts.

As Twitter’s growth has stalled, Facebook has been gaining new users for its main social network as well as Instagram, the social network focused on images and video.

Facebook hauled in some $9 billion in revenue in the past quarter, mostly from advertising delivered via mobile devices.

“Both Facebook and Twitter have talked about working to convince advertisers of value of their ads,” said Jan Dawson of Jackdaw Research in a tweet, noting that the difference is that Facebook is growing “rapidly.”

Twitter, which has never delivered a profit, said it is making progress on improving its product, in the expectation this will boost growth and help it move to profitability.

“We have developed what we believe are steady, stable and sustainable engines of growth,” Twitter chief executive Jack Dorsey told a conference call.

“Twitter is what’s happening in the world and what people are talking about.”

Dorsey said Twitter was focusing on the metric of “daily active users” rather than the more closely watched monthly figure, and said daily usage was up 12 percent, without offering a specific number.

“We’re strengthening our execution, which gives us confidence that our product improvements will continue to contribute to meaningful increases in daily active usage,” he said in a statement.

“We’re also encouraged by the progress we’re making executing against our top revenue-generating priorities as we focus on making Twitter the best place to see and share what’s happening, where you can see every side and perspective.”

Twitter has built a loyal base of celebrities, journalists and political figures — and had been expected to see more engagement following the election of US President Donald Trump, a prolific tweeter who frequently makes policy announcements by tweet.

The San Francisco group has been seeking to draw in users by offering more video including live streaming of sporting events, in a bid to broaden its appeal.

The research firm eMarketer predicts that Twitter’s total ad revenue will grow 1.6 percent this year to reach $2.28 billion worldwide — but that its share of total worldwide digital ad spending will shrink to just one percent.

The research firm said it expects Twitter’s share of worldwide social network users to drop slightly to 10.6 percent in 2017.

Facebook meanwhile is expected to generate $36.29 billion in digital ad revenue, or some 16 percent or the worldwide total, according to eMarketer.

Analyst Michael Graham at Canaccord Genuity said in a research note that Facebook offers a “multi-faceted growth story,” which bodes well for its stock.