Thursday, July 2
You are at:Home»Features»A big bike adventure to Tip of Borneo 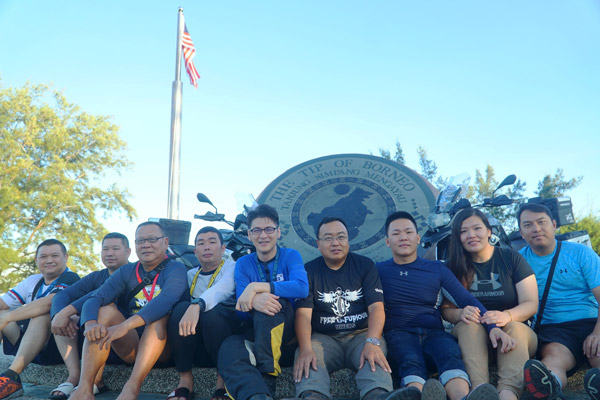 The adventurous big bikers from Sibu.

ON a misty June 24 morning ahead of the Raya holidays, nine riders from the Free and Furious Bikers’ group in Sibu set out on the quest to reach the much talked about Tip of Borneo within two days.

They are experienced big bikers — some with nine years of cross-country riding under their belts while the most junior among them have been biking with the group for two years.

Led by two skilled expedition managers, Michael Ting and Dr Grammen Low, the group revved along the Bintulu-Miri-Brunei-Limbang-Lawas route with its spectacular landscape before reaching the beautiful western coast of Sabah.

For the bikers, it was a dream ride out in open country. Sibu, being more than 80 miles from the sea, is generally viewed as landlocked. Many of its residents, especially among the younger generation, have dreams to venture out and see the world!

A senior teacher known as Mr Hii told thesundaypost, “It’s no big surprise that a group of motorcycle enthusiasts have come together to form the Free and Furious Bikers of Sibu. Young people are usually adventurous. They like to explore and see things for themselves. For them, nine-to-five jobs can be routine and sometimes, even boring.”

Before the outing, they had their bikes thoroughly checked — brakes, lights, oil and fluid levels, tyre pressure and hydraulics — to make sure everything was in order. They also looked into important matters like passports, bike ownership documentation and accommodation arrangements as well as route-planning to avoid travelling on the same road twice while in Sabah.

The group started early on June 24, riding north out of Sibu on a cheerful note.

Onna Yii, the only woman in the expedition, said even though it was raining most of the first day, the group was in high spirits. To her, “eating, laughing and even riding at night is a memorable experience”. She finds big biking “a kind of fulfilment” and she enjoyed herself throughout the ride.

The group detoured to Bintulu for breakfast, then pushed on to Miri. They had a high-tea rojak break in Limbang before riding on to Kota Kinabalu in the dark and rain. In between, they stopped only for short breaks and small meals.

The long 900km ride had apparently worked up an appetite in the riders. Not surprisingly, they found the seafood in the Sabah capital extra tasty. 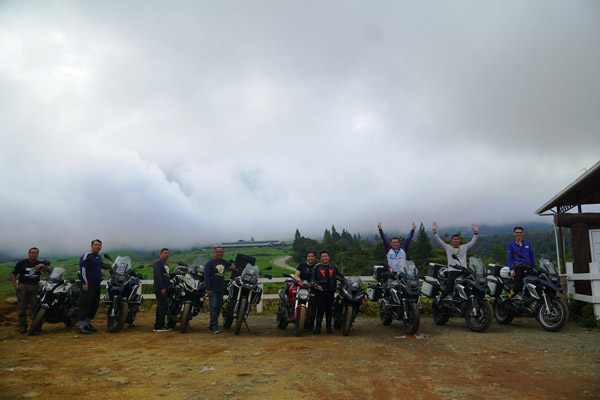 The big bikers in a photo call at the Tip of Borneo.

On June 25, the riders continued their journey in equatorial rain. Undaunted, they pressed on to their final destination, the Tip of Borneo, arriving there in three and half hours from Kota Kinabalu despite the shower.

While many know about this northernmost part of Borneo Island, not many have actually reached it by land or sea. Numerous ships had floundered at this point too. A lighthouse there serves as an ominous reminder that the surrounding seas had been notorious for shipwrecks.

In the past, mystery shrouded this far-lung seaboard of the Land Below the Wind where legends abound. Today, with better roads and publicity, more people have ventured to the Tip, located in the Kudat District.  It is at this awesome promontory, also known as Tanjung Simpang Mengayau or lingering junction, that the South China Sea meets the Sulu Sea flowing from the east.

Like most first-time visitors, the bikers were mesmerised by the stunning sunset. All the aches and pains from the long ride were soon forgotten as the group spared little time snapping pictures of the setting sun, the beautiful Pantai Kalampunian (the long stretch of beach ending at Tanjung Simpang Mengayau), the bronze Globe and the Rocky Outcrop that forms the famous Tip of Borneo.

“We saw the radiant sunset and the beautiful and changing colours of twilight. What an unforgettable sight! As we stood at this northernmost tip of Borneo, we felt lifted in body and soul. We have travelled over 1,190km from Sibu in the heart of Sarawak to enjoy this wonderful moment. I am speechless,” one of the riders said.

After a good night’s rest, the bikers pushed on to the foot of Kundasang for a short stay at the Mount Kinabalu Heritage Resort.

June 26, 2017, was a special journal entry for the group. On the way to the Resort from Kudat, the bikers had to negotiate many tight corners to pass through Marak Parak Road. There were bends, potholes and heavy traffic to watch out for. A misstep could spell big trouble!

Before reaching Kundasang, the bikers by-passed smaller towns like Kota Marudu and Ranau.

Kundasang is in the District of Ranau, situated in Kundasang Valley. It is a 6km ride from Kundasang to Kinabalu National Park and 12km from Ranau town.

The Kundasang vegetable market is open seven days a week. Since it is so near Mount Kinabalu, the bikers could see the highest mountain in Borneo as they rode on, soaking up eye-catching scenes of verdant mountain slopes, farmer huts dotting some of the valleys and awe-inspiring low cloud formations.

The panorama was breathtaking, Onna Yii said, adding, “When we reached the point where we could see the magnificent Mt Kinabalu, all our tiredness disappeared. It was magical.”

The group took lots of photographs with Mt Kinabalu as the majestic backdrop. For some of the bikers, it was a dream come true. 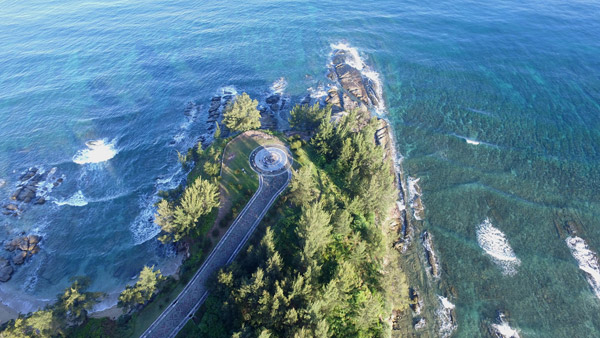 A spectacular drone photo of the Tip of Borneo.

On June 27, the bikers left Kundasang for Sipitiang on an alternative route that took them through Tambunan, Keningau and Tenom.

Sipitang is a small town in interior Sabah, 144km south of Kota Kinabalu and the closest to the Sarawak border. It is famous for satay sold by the waterfront and the bikers were looking forward to a meal of seasoned, skewered and grilled meat, served with palatable gravy. Unfortunately the satay was sold out but there was some roasted meat and ketupat left. The group had to make do and after a quick meal, got ready for the ride home. They arrived in Miri the same day and stayed a night at Imperial Palace Hotel.

The Sibu big bikers ended their five-day ride up north and back on June 28.

Somehow, the journey home from a trip to a new place seems smoother and shorter. Based on local superstitions, the spirits of the road have given travellers the right to pass and will not bother them, making coming home seemingly faster than starting out.

Dennis John, a scholar of local oral stories and ancestral worship, said the superstitious believed spirits are at work, adding that after the spirits have given travellers the right of passage, the latter do not have to “say hello anymore and are quickly waved on”.

On the journey, one of the riders said, “We rode a total of 2,289km, using about 4.64 ltr of fuel per 100km. The time taken was 105 hours and 34 minutes. Michael Ting and Dr Grammen Low put a lot of effort into mapping out the routes. With their guidance, we had a safe and enjoyable ride, and are looking forward to more such expeditions.”

The photographers in the group were Robert Ting and Ling Tiing Tchin. Michael Ting operated the drone.

Each biker spent only RM950 per pax, inclusive of lodging, meals, petrol and miscellaneous items.

The big bikers would hum a little tune as they relate their adventure to the Tip of Borneo. They also pledge to uphold their motto — ‘Together we stand. Together we ride Free and Furious’.

The Free and Furious Bikers from Sibu will certainly ride again around Borneo to experience more of what the world’s third largest island has to offer to adventure tourism. 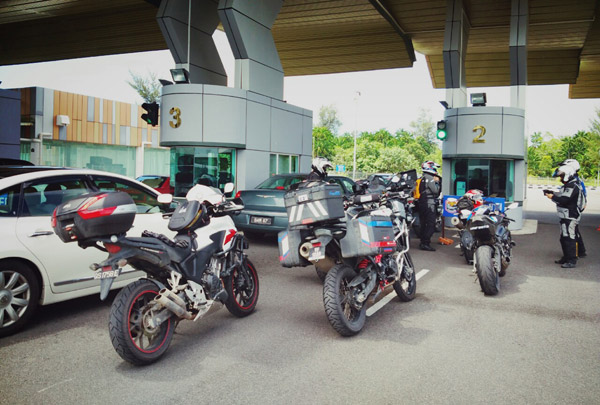 The big bikers at a Brunei checkpoint.