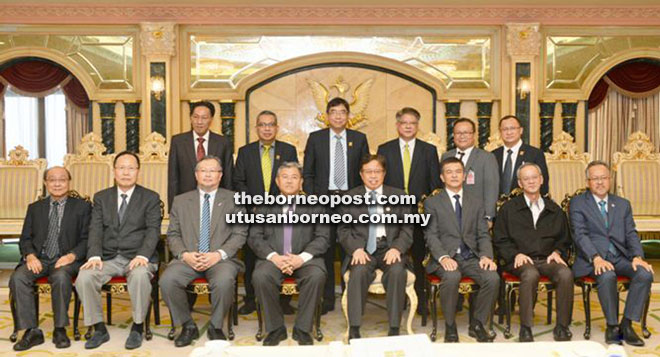 The Board of SFC with SFC senior management at the board meeting. Abang Johari is seated at fifth left.

The meeting deliberated on a wide range of forestry issues including core functions of SFC, forestry research and development, management of national parks and forestry revenue.

A key policy direction arising from the meeting was the appointment of SFC to support the establishment of ‘Industrial Forests’ through an intensified programme of R&D.

Abang Johari called on SFC to come up with tree species which may be harvested within five years of planting.

SFC was also asked to focus on adding value to fast-growing plantation timbers so that Sarawak won’t be forever producing and exporting relatively low-value products like logs, veneer, sawn timber and plywood.

He advised SFC to collaborate with both local and international universities as well as scientific institutions with strong R&D credentials.

The SFC Board also assigned the corporation to undertake special projects related to the development of TPA-based eco-tourism destinations and biodiversity conservation.

The SFC Board is chaired by the chief minister and comprises both senior government officials as well as prominent personalities in the forestry sector.