Monday, January 30
You are at:Home»News»Court»Man on trial over terror activities
For the freshest news, join The Borneo Post's Telegram Channel and The Borneo Post on Newswav. 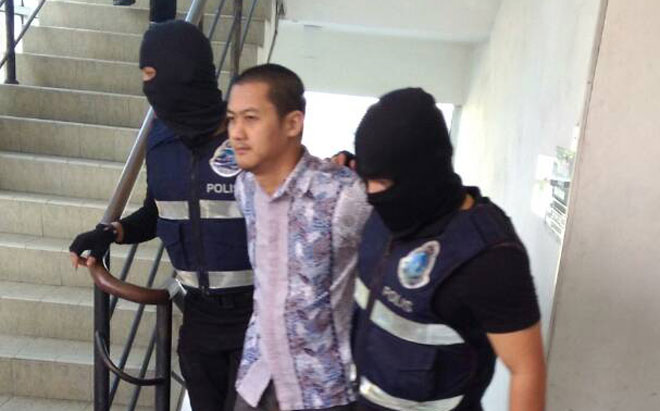 KOTA KINABALU: The trial of a man, who was charged with six counts of committing terrorism activities, began at the High Court here yesterday.

In the first to second charges, Mohd Firdaus Asren Saputra B M S Asren, 35, who was brought before Justice Ravinthran Paramaguru, was accused of giving support to the Islamic State (IS) by making baiah and to commit terrorism acts involving explosives at a conversation group on a social media Telegram, respectively.

The two charges also stated that the baiah and the support were made in the Telegram chatting group named “Gagak Hitam” and “amanah (phb) vs pas” and the accused’s username was “pejuang tauhid”, respectively, at a house at Kampung Contoh in Petagas at 11.32am on March 30, 2016 and June 28, 2016.

Both of the offences were framed under Section 130J (1) (a) and 130 (1) (b) both of the Penal Code, which carry life imprisonment for a maximum of 30 years and a fine and forfeiture of any property provided or collected or made available, upon conviction.

For the third to the sixth counts, Firdaus was accused of indirectly providing RM600 on four occasions, to one Bukhori Che Noor via a bank account for terrorism purposes.

He was charged under Section 130N (b) of the Penal Code which is punishable by a jail term of up to 30 years and a fine and forfeiture of any property provided or collected or made available, upon conviction.

The alleged offences took place at bank branches at Karamunsing in Putatan and at the Kota Kinabalu International Airport here between April 1 and June 30, 2016.

In the opening address, deputy public prosecutor Mohamad Mustaffa P Kunyalam told the court that the prosecution would present oral and documentary evidence to show that the accused had knowledge in giving support to the IS terrorist group and used social media (Telegram) to support the group.

He also said that the prosecution would also show that the accused is the owner of the Telegram account under the name “pejuang tauhid” and that the IS is a terrorist group.

The prosecution would prove that the accused had been indirectly providing RM 600 each on April 1 and 30, June 2 and 30, 2016 which was credited into a Maybank account of one Bukhori Che Noor and that the accused had reasonable grounds to believe that the property would be used, in whole or in part, to commit a terrorist act.

He also said that the prosecution would give evidence to show that the accused was found in possession of an ASUS mobile phone which carried a Digi simcard with phone number 0128650226 and registered in the name of the accused.

The prosecution would also be relying on the evidence of an expert in terrorism as well as statement made by the accused person by virtue of Section 18A of the Security Offences (Special Measures) Act 2012.

Mohamad Mustaffa also said that a protected witness under Section 14 of the Security Offences (Special Measures) Act 2012 would be called to testify in the trial.