Wednesday, May 18
You are at:Home»News»Sarawak»SBF wants amendment to Employment Insurance Scheme Bill 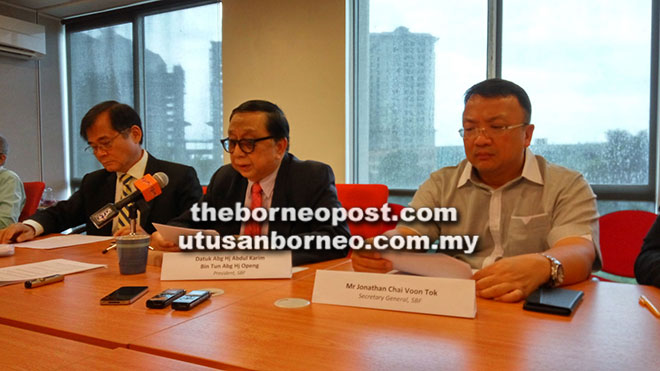 Abang Abdul Karim (centre) speaks at the press conference in the presence of Chai (right)
and Ting.

KUCHING: Sarawak Business Federation (SBF) is against the proposed collection under the Employment Insurance Scheme (EIS) Bill but not the scheme itself.

Its president Datuk Abang Abdul Karim Abang Openg insisted that the SBF “is not against the proposed EIS but we are of the view that major changes need to be made to the scheme that is presented to Parliament”.

“This will collect RM1.63 billion a year based on a calculation of 6.8 million employees times RM2,000 times 12 months. This is grossly excessive and represents a tax on the employers and employees.

“Based on Labour Department Malaysia’s records, during the period of 2007 to 2016 (the

recession years), only an average of RM65 million a year of retrenchment benefits were left unpaid by errant employers.

“Even if we double this benefit now, a maximum amount of RM130 million is needed under the EIS,” he told a press conference at the Sarawak Chamber of Commerce and Industry (SCCI) secretariat here yesterday.

Abang Abdul Karim argued that less than 0.5 per cent of all employees who would be paying for the proposed scheme for life would ever get to benefit from it.

“And even if they do, they are covered for a maximum of three months’ salary over a six month period.”

He thus suggested that the government should also be a contributor to this scheme together with the employers and employees.

“We propose a contribution of RM1 each per month for employers, employees and the government. This will raise RM245 million a year (6.8 million employees times RM3 times 12 months).

“This is more than sufficient to cover the expanded maximum benefit of RM130 million or the past actual experience of only RM65 million per year,” he added.

He stressed that such contributions should not go on indefinitely, and should stop once the EIS fund reached RM1 billion.

“After all, the objective is to cover retrenched employees and RM1 billion is good enough, and if not utilised there is no need to collect again.

“The other programmes which EIS is supposed to help pay for, called Active Labour Market Policies (ALMPS), are already covered under other agencies or payment schemes and should not be paid again,” he said.

Abang Abdul Karim also touched on the current composition of the EIS committee comprising 11 government representatives and nine others, pointing out that: “This to us is not equitable. It should be seven each and include a representatives’ from SBF and Sarawak employees representative.”

“We support the government’s initiative to actively engage with the stakeholders especially the employers prior to the second reading of the EIS Bill in Dewan Rakyat.

“Again, we are not against the Bill but we want the government to change it as the EIS should be established to pay unpaid retrenchment benefits,” he added.

The EIS Bill was tabled for the first reading in Parliament by Human Resources Minister Datuk Seri Richard Riot Jaem on Aug 1.

The proposed scheme is primarily aimed at helping provide financial assistance to private sector workers who lost their jobs until they find new employment.