Thursday, October 22
You are at:Home»Columns»Quick Chat»A journey of service and discipleship 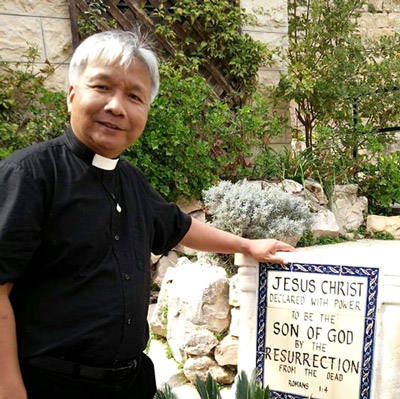 Danald stands next to an inscription from the Bible at the Garden Tomb in Jerusalem.

REVD Danald Jute will be consecrated and enthroned as the 14th Diocesan Bishop of the Anglican Church in Sarawak and Brunei, which is known as the Diocese of Kuching, during a special service at St Thomas’ Cathedral, Kuching, at 4pm today. Danald, who turns 51 in November, will be the diocese’s fifth local-born bishop.

Some at the Cathedral will remember when Danald used to teach Sunday School and Confirmation Classes in the late 80s. It was actually during his own Confirmation Class, at the age of 12, that his personal relationship with God would begin. From when the seed was sown, Danald’s journey of faith would consistently lead him along the path of service and discipleship.

Having completed his Bachelor of Divinity (Hons) at the University of Edinburgh in Scotland, Danald would serve as lecturer at the House of Epiphany Theological College, where he first completed his Diploma in Missiology from the Australian Theological College. He then served again at the Cathedral as assistant priest. In 2003, Danald became associate rector at St Andrew’s Milngavie, All Saints Bearsden and Drumchapel Congregation in the Diocese of Glasgow. He would later become rector of St Oswald’s, Kings Park in Glasgow.

Since 2009, Danald has been vicar of The Good Shepherd Church in Lutong, Miri, which is located next to Masjid An Naim. The two houses of worship have become shining examples of Sarawakian interfaith unity and harmony. Both online and mainstream media nationwide have highlighted how these two communities of faith support each other.

In his personal statement, Danald stated he believes “a priest has been called and entrusted by the Lord to feed, nurture, and lead His people; while at the same time reaching out to the lost world with the life-changing Gospel of the Lord Jesus Christ”.

He added that his “pattern and model of leadership is the Good Shepherd, the Son of Man, Jesus Christ, who came to serve and not be served”.

Despite an extremely tight schedule as he prepares himself for the challenges of the office of overseer, Danald made time to answer a few questions from thesundaypost. 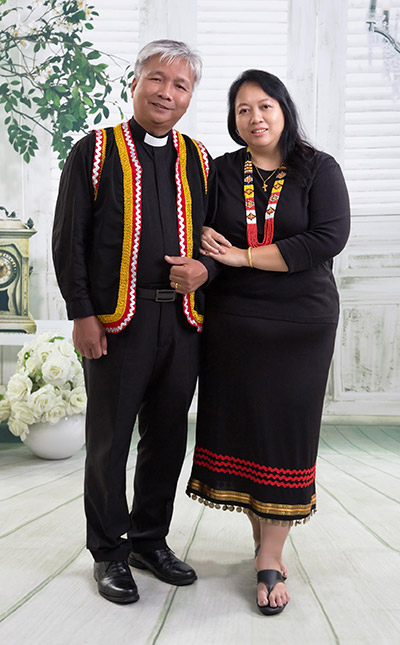 Danald with his wife Julita Jack Sungul. They are blessed with four children — Izra, Iona, Ian, and Ingrid.

Tell us about your background — where you grew up, family, were they Christians?

I was born in Kampung Plaman Nyabet, Serian on Nov 24, 1966. The seventh of eight siblings — four girls, four boys. My mother was Bidayuh and father Sino-Bidayuh father — his father was from China.

Growing up without mother was never easy. She died when I was eight years old. Thank God, we had the best father!

He worked very hard for the family. From a very early age, I learnt to fend for myself, as father was focussing on earning money for my older siblings, who were in secondary school. I learnt how to cook, helped fetch water from the river, looked for vegetables, and washed my own clothes.

I come from a Christian family. My parents converted to Christianity just before I was born. The Christian faith has always been important to me from childhood. My father would always make sure that we went to Church on Sundays, and not just when the local priest came to visit.

You mentioned coming to know God during Confirmation Class. How did it change you?

While in Confirmation Class — in Primary 6 at All Saints’ Primary School, Plaman Nyabet — I began to realise that God is real indeed and that He accepted and loved me. And I want to love Him back! Soon, I found myself leading our Confirmation Class, especially when the catechist was not available to take our class.

Looking back, how do you think God was preparing you for your calling?

My growing up years, with no small challenges, helped to mould and shape me. I never realised, then, that God was working on me. Looking back, it was there — during my Confirmation Class — when I was 12 years old, that I first heard the call from God; a call that I could not run away from, for I kept hearing it again and again. Many things unfolded over the next few years which, when one looks back, were clearly moments of calling and assurances from God that He wants me to serve Him full-time. 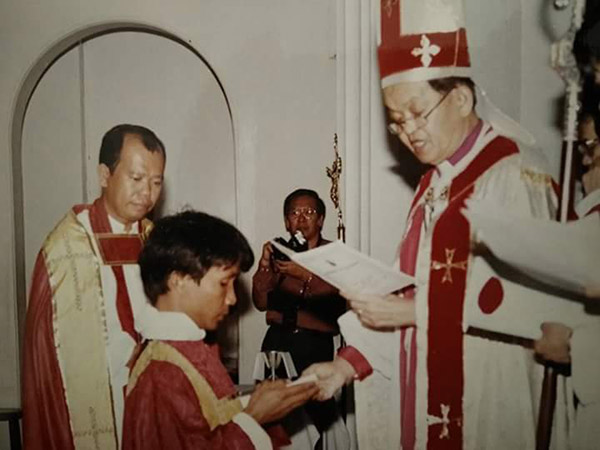 Danald kneels before the late Right Revd Dato Sri John Leong during his ordination as a deacon in 1992.

How did you hear the call to full-time ministry? What made you sure?

While studying at St Joseph’s Secondary School, Kuching, I felt challenged, especially by the Irish De La Salle Brothers, who were running the school, to offer myself to full-time ministry. How odd — an Anglican boy thinking about ministry in a Roman Catholic environment! I was always amazed by their commitment, zeal, dedication and sacrifice.

During this time, my older brother Nyaut, who was always active in Church/students’ fellowship, took me to see Fr Tudball, who was in charge of school chaplaincy. Meeting him and seeing his enthusiasm for the Lord and for student ministry made me wonder even more. I began to ask God directly, ‘Are you calling me? Do you want me to serve You full-time?’

Later, I moved to Kolej Tun Abdul Razak, but the questions remained. I continued to ask God and found some of the answers in what I was doing and involved in. I found great joy in serving my fellows as a boarding prefect, class monitor, and head section leader of the

Red Crescent, working closely with the nursing matron. But the greatest joy was serving as leader of the Inter-School Christian Fellowship and the Anglican Young People’s Association, especially the privilege of serving as the ‘bag boy’ for the then school chaplain Fr Aeries Sumping (now Assistant Bishop of Kuching).

What made me sure of the call? I was never really very sure about it, especially as those closest to me weren’t very supportive of the idea initially. My father was unhappy when I first intimated to him that I wanted to train to be a priest.

You have spent time ministering in the UK, what were some of your most significant experiences and how did they influence your ministry today?

The Church in the UK is very different from our local Church here. Many churches are attended only by elderly people. It was an honour, joy and privilege seeing life being breathed into the four congregations/churches at Milngavie, Bearsden, Drumchapel and King’s Park, Glasgow where I served.

Liberalism is a big challenge. The Church must hold firmly and faithfully to the Word of God in the Bible. We must not depart from the truth as taught in the Bible. We cannot simply interpret the Bible to suit the agendas or desires of certain people.

At the same time, the power of the Gospel must be so real in us that its truth is manifested in our life. We must love Jesus and others genuinely. In sharing the Gospel, it must not be articulated in terms that are beyond the people — using big words and jargon!

During your time in Lutong you were quite visible when it came to inter-religious harmony. Could you elaborate?

Of late, Malaysia has been living dangerously on the verge of self-destruction. We have allowed politicians to (ab)use our differences in beliefs, religions, colours and cultures to divide us as a people, a nation.

It is our Christian calling to build a better Sarawak, better Malaysia, where we respect and honour one another. Yes, we

And so in Lutong, we work closely with our Muslim neighbours and others. We share a carpark together; we visit one another. We have a very amiable relationship. They happily join us for our Christmas celebration, along with our Buddhist, Hindu, Taoist friends and others. And we reciprocate when invited during Ramadan and Hari Raya. 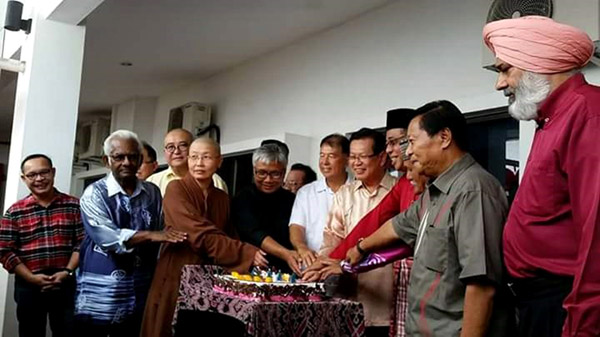 How did it feel to be appointed as the 14th Bishop of Kuching?

I accept with trepidation. I feel enormously humbled by the confidence and trust placed upon me by my fellow Clergy, the Laity and the Provincial Bishops.

I am overwhelmed by my unworthiness for this enormous calling as the 14th Diocesan Bishop of Kuching.

It is my intention to build on the outstanding works of Bishop Datuk Bolly Lapok and his predecessors. At the same time, I intend to explore new ways to bring the love, power and hope of the Gospel to our multi-religious, multi-racial/ethnic society and beyond. I seek the support of my fellow bishops, priests, and all members as I take on this immense responsibility.

What will be your main areas of focus as Bishop?