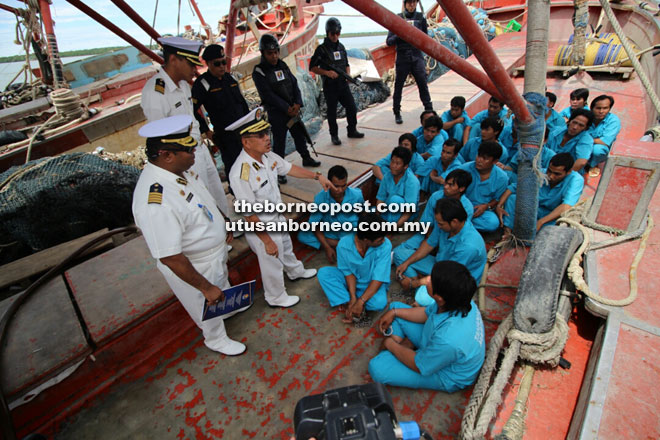 MMEA Sarawak chief First Admiral Ismaili Bujang Pit said the two vessels were caught some 185 nautical miles from Tanjung Po around 10.45am following a tip-off by members of the local maritime community.

“Around 10 tonnes of different species of fish were also seized,” he said in a press conference at the Tun Abang Salahuddin Maritime Complex (Komtas) jetty in Muara Tebas here yesterday.

A total of 22 crew members and one skipper, aged between 16 and 45, were arrested and will be investigated under the Fisheries Act 1985. According to Ismaili, the seized vessels – estimated to be worth around RM5 million – are able to stay in the open sea for up to three months.

“It is lucky that we managed to nab both vessels and the crew,” he said, adding that if found guilty, each crew member will be slapped with a fine of between RM100,000 to RM1 million or face jail time.

On a related matter, he revealed that between Jan to Aug this year, a total of 316 Vietnamese crew members have been arrested for encroaching into state waters and fishing illegally.

The figure, he said, is almost double the 189 crew members arrested by MMEA the whole of last year for encroaching into the state’s exclusive economic zone (EEZ), which spans 239,605 sq km.

“We have also recorded a total of 67 such cases since Jan 2017 involving 26 foreign vessels. This is the highest since MMEA was formed in Sarawak 11 years ago,” he added.

Also present at the press conference yesterday was MMEA Kuching district director Shahref Steve Mac Queen Abdullah. Members of the local maritime community who come across illegal activities or suspicious fishing boats in the EEZ can contact the MMEA on 082-432544.