Wednesday, March 3
You are at:Home»Columns»Uncle DI»That pussy in the well 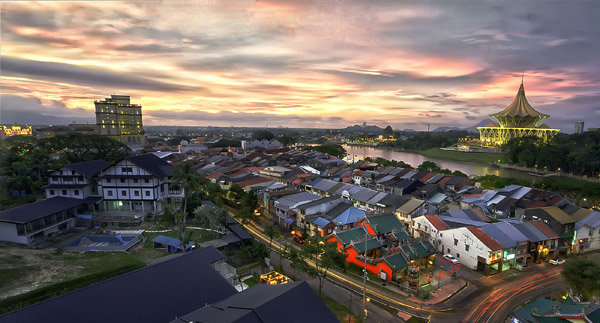 On its 145th birthday, the origin of its name is still under dispute.

I’M unable to make head or tail of it – this controversy over the origin of the name of ‘Kuching’ for our city.

I think that there are many people in Sarawak and elsewhere who wish to know more about how or why our Kuching was named Kuching in 1872, and not by any other name.

There are a couple of questions that journalists would have loved to ask Rajah Charles Brooke himself at a press conference. That, of course, is impossible now. That means that we have to continue guessing: was it named after a well, or a river, or a tree?

We are hampered in our quest for the truth. Unlike his uncle James, Charles is not known for keeping diaries; as a result, we are the poorer for information about the origin of the name. However, there is some hearsay that Charles Brooke was influenced by the Iban way of referring to the river rather than the name of a locality when asked about where one comes from. The first thing that an Iban would ask of a stranger is the river where the latter comes from. Charles, as Rajah Muda, had spent a lot of time with these people in Simanggang and he knew how to communicate with them. That might have influenced him to use Sungai Kuching as the name for the town four years after he became the Second Rajah of Sarawak.

It may be possible to obtain some additional information regarding the reason or rationale for Kuching to be chosen as the name of the most important centre of the Brooke administration – from private papers of the officials who had served under Rajah Charles (1868 to 1917) or even from those in the service during the Third Rajah, Vyner Brooke (1917 to 1946).

I’m not suggesting that we all should go to London to find out. Most of the digitalised materials on the Brookes are available at the State Library, but none that I know specifically mentions the rationale of choosing Kuching as the name for the administrative capital of the country. I might have missed it.

Keep on searching for the elusive ‘pussy’ in the well, in the stream, and on the fruit tree. But the well and the stream have been filled to make way for development – for Upper China Street, while the fruit trees have been cut down for a school and shophouses.

Sources from Kuching and Singapore

Naming a town, for the capital city of a country, is an important decision of any government. It is not impossible that Charles could have consulted Ong Ewe Hai, the leading Chinese merchant of the day, or Ewe Hai’s business partner Lim Eng Moh. Most likely, he would have mentioned his proposal to call Sarawak by another name, ‘Kuching’, to one of the Malay Datus. Does any descendant of the Datus have any document or even oral evidence to share in this quest for the origin of the name ‘Kuching’?

As this was such an important decision to make, it would be unusual for the authorities not to have put down in writing for official purpose the reason or the rationale to change the name of Sarawak to Kuching. But where is the evidence?

Without concrete evidence, we will keep on speculating. And in the process, everybody believes he is right.

It is said that James Brooke had referred to the settlement as Cochin meaning port. He might have heard about ‘Cochin’ in what was then Indo China now Vietnam. Did his nephew Charles use this?

All sorts of speculations and theories add to the confusion.

Some day in the future, a reliable source of information as to the origin of the name ‘Kuching’ may be discovered. It may not be in the well, or in the stream, or on the fruit trees at all.

Go by the existing books

For the present, let’s stick to what authors of books have written about the city, not relying on them as a source of gospel truth but something to work on in our quest for the true origin of the name ‘Kuching’.

All writers have settled for the theory that the stream filled up in 1928 was given the name Sungai Kuching because on both of its banks, and on the hill behind the present temple there were plenty of fruit trees called Mata Kuching. Who planted them? From this came the name Kuching. But the source has been disputed. The name is from ‘koo ching’ – the well under Upper China Street.

So searching for the most likely source of the origin of Kuching is the job of any one who is curious about the origin of its name.

Remember that writers are not infallible. For instance, certain facts about Kuching of the past have escaped their attention, especially those writing in the 1950s.

For instance, although extracts from James Brooke’s dairy were published by Henry Keppel in the book ‘The Expedition to Borneo of HMS Dido’, yet James Brooke had recorded only the Bruneian Malays as having houses on both banks of the Sarawak River. To him they were all Bruneian Malays. He did not know of the existence of the Dyaks, who had lived at Padungan and at Gersik, long before he arrived in Sarawak in August 1839.

In his handwritten letter dated Dec 24, 1859 to his bosses in London, Reverend Gomes, a priest of the Anglican Church was complaining about the shortage of missionaries for the conversion into Christianity of these Dyaks and the Millanows. The people living on the banks were, according to Gomes, the Millanows and he was lamenting the fact that the Mission had lost one Charles James Fox, trained to be a priest. Fox had joined the Rajah’s service instead, to the annoyance of Bishop McDougall.

Another source of information on the Padungan Dayaks is the book called ‘The Anglican Church in Borneo 1848- 1962’ by Brian Taylor, a chronicler.  Read it.

has developed into a big town and eventually into a city. Not one, but two cities, for good measure.

Come next Kuching Festival, I hope someone will not forget to mention the Padungan Dyaks and Gomes’ Millanows – a serious omission in the official history of an early settlement, whatever  the origin of its name.