Saturday, October 1
You are at:Home»News»Sarawak»‘All-out effort to boost pepper industry’ 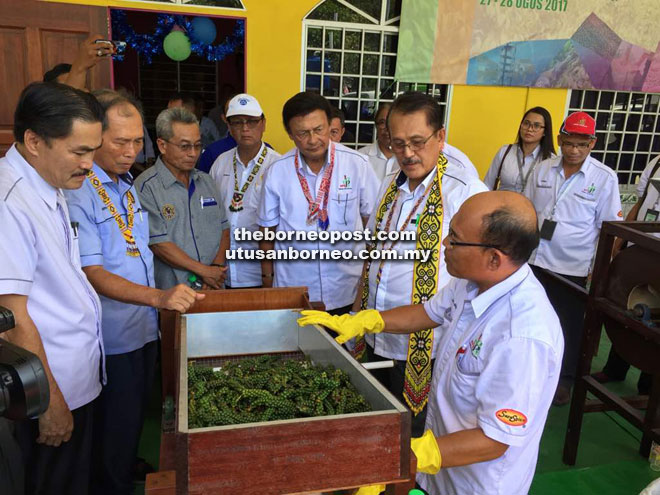 Datu Nasrun (second right) attends a briefing on a machine, used to separate the peppercorns from the bunch. With him are Salang (second left), Rolland (fourth left) and Mawan on Datu Nasrun’s right.

SIBU: The federal government, through Malaysian Pepper Board (MPB) will work together with the state government in developing the pepper plantation industry further.

“The government, through MPB, has the allocations and various assistance schemes to help smallholding pepper farmers to start new plantations and also to develop their existing crop.

“The schemes are provided towards creating quality peppers, according to the standard that has been set,” he told reporters in Julau on Monday.

Datu Nasrun was replying to a question whether the federal government would give full power to the state government to develop the pepper industry.

Meanwhile, the deputy minister said MPB would investigate on the allegation of those importing low quality pepper from the neighbouring country and mixing them with the ones planted in the state.

He said the board would strive to come out with the best mechanism to counter such irresponsible act and thus, protect the quality of Sarawak pepper.

“Sarawak pepper is among the products that are gaining higher popularity in the world; therefore, it is important for the government to ensure that its authenticity is preserved,” he pointed out.

Earlier, Datu Nasrun officiated at the unveiling of the Pepper Farmers Road project in Wong Keredat, Ulu Entabai in Julau.

Works commenced on Jan 11 and is expected to reach completion by this mid-September.

The 1.13km stretch is implemented under the cooperation with the state Department of Irrigation and Drainage (DID) to improve the daily mobility and also to improve the socio-economy of the longhouse folk.

Datu Nasrun, who was on a day’s working visit to the state, later attended the closing of a seminar on ‘Pepper Grading and Quality Pepper Production’ at Rumah Segan Jubin, Mile 16 of Pakan/Engkamop Road in Julau.

There, he advised farmers to save or to make investments wisely and accordingly when pepper’s value is high. It is because pricing depends on global demand and supply, he explained.

Previous ArticleMemorial service at Heroes Memorial Park attended by 72 veterans
Next Article Presidents, queen among those invited, not speakers, at peace summit