Thursday, February 2
You are at:Home»News»Sarawak»Girl’s cochlear implant op a success
For the freshest news, join The Borneo Post's Telegram Channel and The Borneo Post on Newswav. 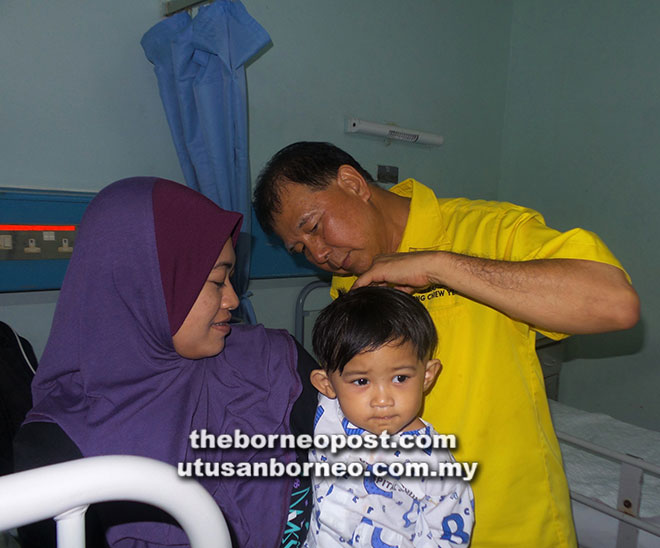 Ting takes a closer look at the surgery marks behind Noor Batrisyia’s ears as the girl is held by her mother, Alis.

MIRI: Two-year-old Noor Batrisyia Ramlan, who suffered congenital hearing loss, may be able to hear and speak in the near future, following the success of the cochlear implant surgery on Monday.

The operation on both her ears, which took four hours, was made possible through generous contributions from many individuals and organisations including Deputy Prime Minister Datuk Seri Dr Ahmad Zahid Hamidi, who handed over a donation of RM50,000 recently.

The girl’s mother Alis Rama Afindi could not utter ‘any word worthy enough to express gratitude to all those who contributed’, especially to Piasau assemblyman Datuk Sebastian Ting ‘who has been with us all this time’.

“We are really thankful – we are very poor and there’s no way that we could raise enough money for the operation. But with the help from the kind-hearted Datuk Sebastian Ting, we’re able to get enough funds. We thank everybody, including the medical specialists and personnel, for making this operation possible,” Alis, a housewife, told reporters who accompanied Ting in visiting the family here yesterday.

Her husband Ramlan Abdul Hamid, who is a security guard at a local secondary school, hails from Kampung Iran in Niah near here.

In his remarks, Ting – also Sarawak Cochlear Implant Association (SCIS) chairman – thanked all those involved in helping to realise the family’s dream of seeing the girl be able to hear and speak.

“The cost for the operation amounts to RM120,000. We are thankful to everybody, including our Deputy Prime Minister – we will send him the girl’s current photos soon.

“I learn that Noor Batrisyia is responding well to the treatment, which is good news,” said Ting.

It is learnt that Noor Batrisyia should be able to go home today (Sept 6), but would need to undergo follow-up treatments.

According to Ting, Noor Batrisyia is the third patient that SCIS has helped. The association sponsored the surgeries for two children, Ivan Ling in 2014 and Athena Kho Yuan in 2015.

Noor Batrisyia is the younger of two siblings. She was diagnosed with hearing loss soon after she was born on May 14, 2015.