Saturday, December 3
You are at:Home»News»Sarawak»Julian not defending Stampin in parliamentary polls — Chong 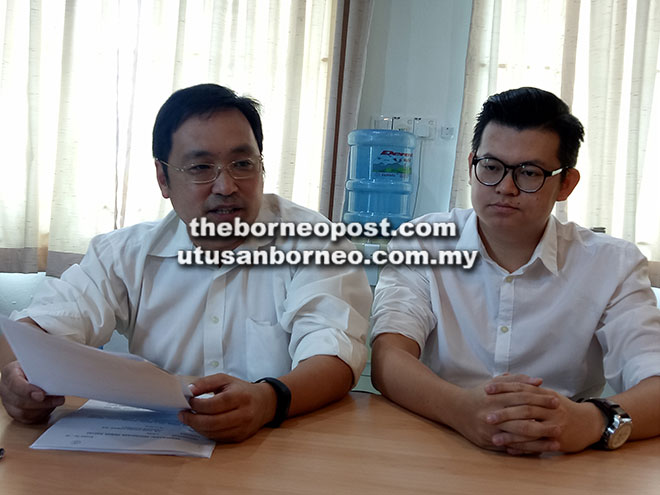 Chong (left) fields questions during the press conference. With him is Yii.

KUCHING: Stampin MP Julian Tan Kok Ping will not be defending Stampin in the next parliamentary election.

This was confirmed by Bandar Kuching MP Chong Chieng Jen, who said the one-term MP had informed the party of his intention.

“Julian Tan will not be contesting in the next (parliamentary) election as he has decided to retire from politics and focus on a career in science and technology,” he said at a press conference yesterday when asked to comment on rumours that Tan would not stand as a candidate in this election.

Asked if the party had already identified a new candidate to replace him (Tan), Chong who is also state DAP chairman, replied: “Yes, it will be one of my special assistants.”

When pressed further to disclose if the new candidate would be Dr Kelvin Yii, who was also present at the press conference, he simply said: “Just wait and see.”

On a related matter, Chong said the seat negotiations among the three component parties of the opposition pact, Pakatan Harapan (PH), in Sarawak had long been settled.

“We have settled this from as early as last year, so it is not an issue,” he said, adding that DAP would be contesting in the same number of seats as contested in the last parliamentary election.

“We will stick to that arrangement.”

“I speak on behalf of PH Sarawak that PAS is not part of us. They can come in for three-cornered fights during the election if they want to,” he said.