Friday, December 2
You are at:Home»News»Sarawak»Linyi Trade City keen to collaborate with Sarawak 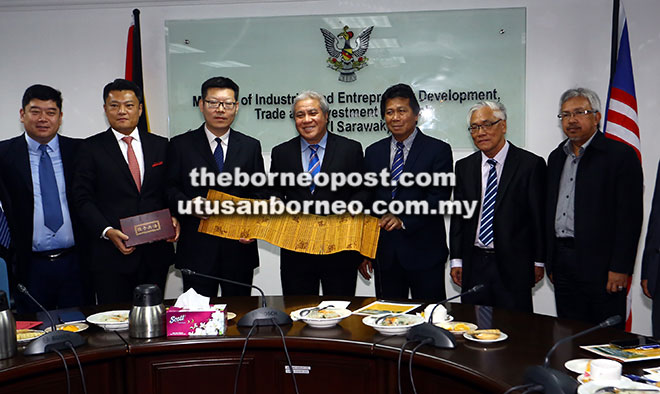 Zhuang and Tay, who also represented Jung Kuo Sdn Bhd – a company under Thai Loon Group – have entered into a memorandum of understanding (MoU) to explore opportunities for the benefits of both countries.

Awang Tengah, who is also Minister of Industrial and Entrepreneur Development, witnessed the signing and exchanging of the documents.

“This is a business-to-business cooperation between a local company and Linyi Trade City, which is the largest trade centre in northern China.

“This is good for our state because (local and domestic) businesses can source various products like construction materials, some of which are imported here, without having to fly all the way to China,” he added.

Sarawak, according to Awang Tengah, is strategically located within the Asean market of more than 600 million people.

“Besides commodity, agriculture, livestock, timber and timber-based industry, Sarawak is going into manufacturing and heavy and energy-intensive industries to drive itself towards industrialisation, and at the same time focusing on building the digital economy.

“Moreover, we have the advantage of electricity (with Bakun hydro-electricity power dam), competitive land price, business-friendly government and political stability,” he said in his briefing to the Chinese delegates.

The MCITC – touted as the largest one-stop trade centre in Borneo – consists of a convention centre and over 500 commercial and industrial shoplots.

The main purpose of the centre, according to a press statement, is to serve as a hub for manufacturers from China and local small and medium enterprise (SME) players to benefit from China’s ‘One Belt One Road’ initiative.

It will provide a platform for exchange of trade and economic activities between China and Sarawakm, as well as access into major markets in Southeast Asia.

Assistant Minister of Industries and Investment Malcolm Mussen was among those present.