Wednesday, August 10
You are at:Home»News»Sabah»Girl challenges five to fight for boyfriends 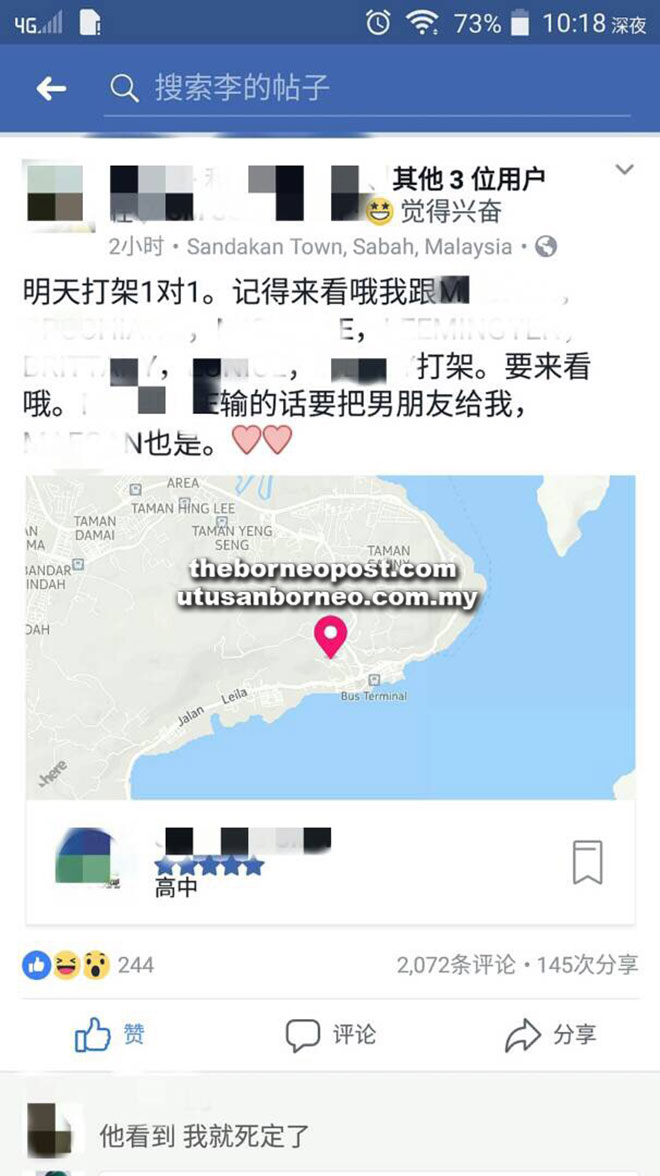 SANDAKAN: A 13-year-old secondary school student has allegedly challenged five girls to a fight, saying she would get their boyfriends if she wins.

The post was written in Chinese and read: “Tomorrow one-to-one fight. Remember to come and watch me (fight). I will be fighting with (the five girls’ names were mentioned); if they lose they have to give me their boyfriends.”

The post also included the venue of the fight, which is the secondary school she attends here.

Many ex-students and students of the school commented on her challenge and asked her to take the post down as it affected the image of the school.

The admin of the school’s official Facebook page also commented: “May I suggest that this post be taken down immediately? Not only are you shaming yourself but (you are shaming) the entire school. This matter has been brought to the attention of the school’s admin.”

Within a few hours, the post had received over 3,000 shares and likes.

The school reported that there was no fight at the school to date and it was monitoring the situation after discussing with the student and her parents.

The girl surnamed Lee deactivated her Facebook account on Tuesday morning, but Chinese independent online news portals had taken screenshots of her post and they were still shared widely as of yesterday.

A friend who would like to be called Wendy, said Lee always had a crush on a 12-year-old boy, who was the boyfriend of one of the girls she had challenged to fight.

“Lee does not have any martial arts background. I do not know why she would propose a fight in the open like this. I think it was a bad decision to have linked the post with the school,” Wendy said.

Parents are worried of such behaviour shown by youths of such young age.

One of the parents said: “We are sending our children to school to learn and gain knowledge, not to fight for boyfriends. This is very sad to see, this (behaviour) coming from a local Chinese girl. We (parents) have to be careful with what our children do with their social media. We also have to keep an eye on their social interaction as well as behaviour and how they spend their time at school.”