Friday, August 19
You are at:Home»News»Sarawak»‘Peace means more than just absence of war’ 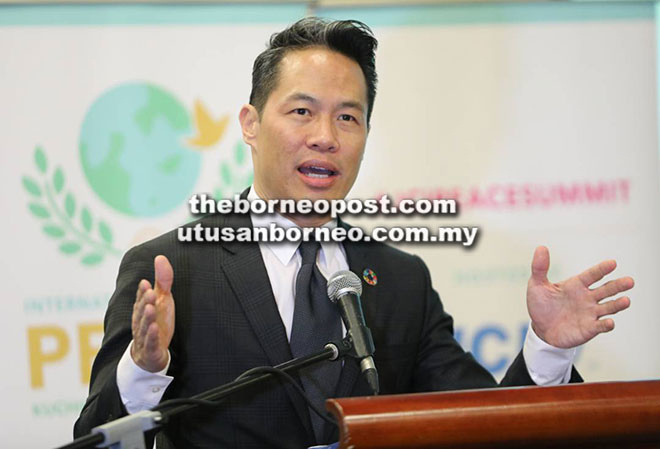 KUCHING: Peace takes many forms and there are many ways of achieving it.

“Pursue a goal, one that you feel most passionate about, that can contribute towards achieving true peace,” journalist and MSNBC news anchor Richard Lui told young people and peacemakers in his keynote address at the Junior Chamber International (JCI)’s International Summit on Peace held at Borneo Convention Centre Kuching (BCCK) here yesterday.

“Wisdom is wealth and it takes a long time to even get a little bit of that.”

Lui was encouraging young people to incorporate one of the Sustainable Development Goals (SDG) in their work or life, whether on an individual basis or at an organisational level, to get closer to peace.

More than 600 delegates from over 100 countries have gathered here for three days until Friday to share knowledge, experiences and add their voice to create everlasting peace.

“Make small steps to move forward on that crucial goal for peace. In every step of the way, I am reminded of how big and how difficult that word ‘peace’ is, like it weighs a million pounds. It is a heavy word,” Lui said.

As he continued sharing about the many news headlines and stories that threatened world peace, Lui reminded those present of the need to keep pushing to create a peaceful tomorrow.

“I was thinking about what that means, ‘create’ first of all and it could be one of the most difficult words we could probably entertain,” he said.

“From icons of creativity from Toyota to Ghandi, from nothing or little comes something amazing. Creating itself is a practice of the welfare paradox. You spend so much to create and you don’t get the return for years or decades in front of you,” he added.

Peace, he pointed out, is not only about war, but also about equality, poverty, health and more which the United Nations (UN) tries to tackle altogether at once. 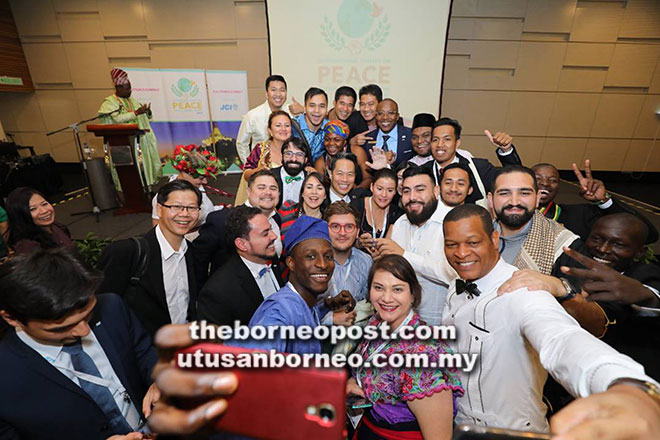 Delegates from all over the world take a wefie together at the JCI International Summit on Peace.

“Tomorrow means not today, sometime in the future, but each and every day after today, one after the other that we will wake up to another day and make it a better day,” he elaborated when speaking on ‘creating a peaceful tomorrow’.

“It is an awesome objective and we are going to take it on our way, potentially very large in scope and meaning. As for those coming from the conflict zone, peace need not be solely defined as the absence of war or conflict, it is both bigger than that and smaller than that,” he said.

Pointing to the 17 parts of the SDG, Lui emphasised that peace is larger than its definition and achievable by selecting the goals important to different individuals.

“The goal I chose, that I am passionate about to reach peace, is on gender equality. Just pick one of the ways in SDG and pursue it and if you don’t like it, pick something else,” he said.

Lui was strongly against human trafficking, the news of which he has covered to a great extent, as it can lead to crimes against humanity including sex trafficking and slavery.

He shared inspiring tales with the audience of social activist James Kofi Annan on his work to stop child slavery and Nikki Haley, the current United States Ambassador to the United Nations as well as the HeForShe campaign that engages men and boys as agents of change by encouraging them to take action against negative inequalities faced by women and girls.

“Gender equality is just one part of peace. You can choose one (initiatives or SGD) that ignites your passion to work towards achieving peace,” he shared.