Wednesday, October 27
You are at:Home»News»Sarawak»Call to give Wallace’s Sarawakian assistant due recognition 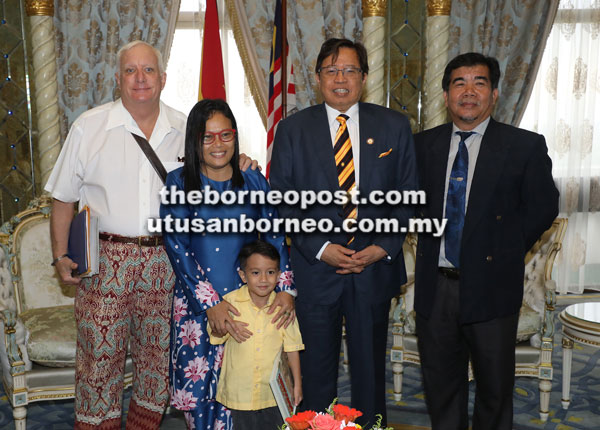 Abang Johari during the courtesy call from (from left) McLaughlin, Suraini and their son. Also seen is State Museum Department director Ipoi Datan (right). — Photo by Chimon Upon

KUCHING: British naturalist Alfred Russel Wallace’s Sarawakian assistant Ali Amit should be given due recognition with his own place in history.

Author Tom McLaughlin, who made the suggestion, said Ali was Wallace’s assistant from 1854 to 1858.

“He was brought by Wallace to go with him to tell him about the jungle of Sarawak, about the earth, the insects, the animals, because the white man didn’t know about anything here.

“He started to follow Wallace at the age 15. It was that guy (Ali) who introduced to Wallace whatever was in the forest here. My wife (Suraini Sahari) and I feel that it is important we bring a Sarawakian up to show that Ali was a very important member of the Sarawakian community,” he told reporters after paying a courtesy call on Chief Minister Datuk Amar Abang Johari Tun Openg yesterday.

McLaughlin, an American expatriate living here, said he had spoken to the Chief Minister about Ali and suggested buildings in Santubong and the Sarawak Museum be named after Ali.

According to McLaughlin, Ali was initially from Kampung Jaie, then moved to Kampung Panglima Seman.

It is understood that he met a man named Edward at the Astana and learnt English, which later led to his association with Wallace.

“We have written a paper that shows that Ali was here and lived here in Sarawak and did not go to New Guinea. We have his grave at Kampung Jaie and we also have here that he worked in Panglima Seman, and that he should be honoured because here we already have enough white men,” he said.

“You people do not need any more white men. You have Ali and he must rise up and be shown as a true leader in the Sarawakian world.”

McLaughlin is the author of ‘Borneo Tom: Stories and Sketches of Love, Travel and Jungle Family in Tropical Asia’.