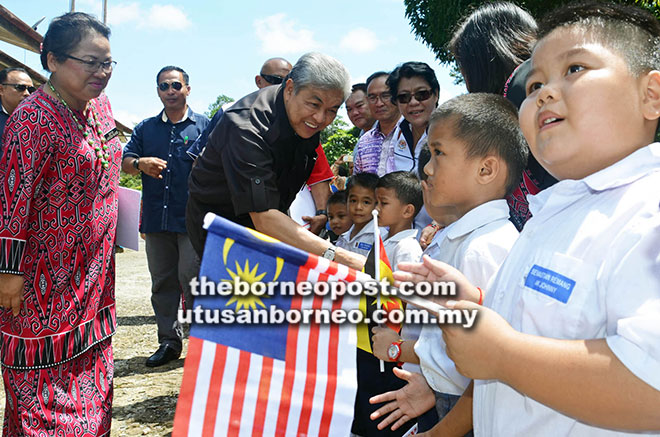 Zahid (second left) is met by SK Ulu Sungai Salim pupils on his arrival at the school. Looking on at left is Dayun. 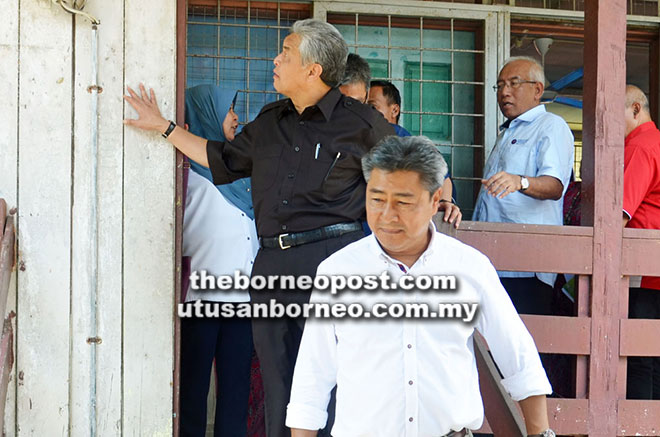 Zahid checks the condition of Block A at SK Ulu Sungai Salim.

SIBU: SK Ulu Sungai Salim can almost be sure of getting new buildings following the visit of Deputy Prime Minister Datuk Seri Ahmad Zahid Hamidi to the school yesterday, during which he saw the poor condition of the school’s infrastructure.

According to headmistress Dayun Jackson Bunsie, the school is categorised as a dilapidated school and needs new buildings, particularly for classrooms to provide an environment conducive for learning and teaching.

“One of the buildings designated as Block A which is used for Primary 3 classes, textbooks store and library, is already 59 years old. The administration building that also houses the teachers’ room was built in 1981. As we can see, the buildings are very old. We have to be very careful when stepping on the wooden floor,” she told reporters after Zahid’s visit.

Dayun said the school was built in 1957 on a ‘gotong royong’ basis by the longhouse residents led by Tuai Rumah Emba Landa after they obtained the approval from Sibu Rural District Council.

The registration of the school was later approved by the Sarawak Schools Registrar on May 12, 1958, she recalled.

“Classes commenced after that with 20 Primary 1 pupils. The school was then reachable via river and dirt road.

“Road access to the school from Sibu town was only available after March 1967 and the road leading to the school was tar-sealed in 2006,” she added.

She said the school received a grant of RM59,700 from the government in October 1994 to replace the asbestos roofing with zinc and for electrical rewiring.  She added the school presently has 104 pupils, 13 teachers and three administrative staffers.

Zahid spent about 40 minutes touring the school before leaving for Sibu Airport where a press conference was held.