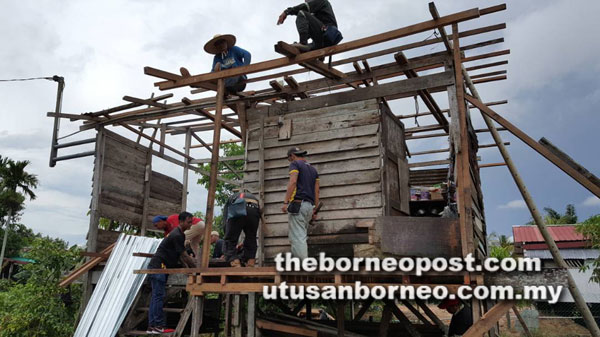 D360 members dismantle the old roof and reinforce the walls of Richard’s house.

MIRI: Members of the Dayak 360 (D360) Miri Chapter observed Malaysia Day not by holding festive celebration, but by conducting a work party to repair the house here, occupied by a family of eight, on Saturday.

Richard Dular, in his 40s, and his wife together with their six children – aged between seven months old and 17 years old – have been living in a dilapidated house at Tudan for years. Things went from bad to worse when Richard lost his regular job two years ago due to the bad economy. When the D360 Miri team arrived at the house, they found out that the family was living without clean water and electricity supply.

According to team leader Walter Sela, due to financial problem, Richard had no choice but to have the water and power supply cut off as he could not settle the bills.

“Now they rely on rain water – most of the time, they collect water from the Fire and Rescue pipe nearby.

“The eldest son had to quit school to help his father do odd jobs to support the family,” Walter said, adding that the other four children are attending school.

“We have been planning for this work party over the past three months, involving 27 D360 members, including those all the way from Rumah Liam and Bakong,” he said.

On D360 Miri behalf, Walter expressed his thanks to one Haslan Morshidi who presented the team with a cash donation of RM2,000 from himself, members of Baram Brothers and the congregation of the local mosque.

“We also received a donation of 20 zinc roofing sheets from PKR Miri for the ‘gotong-royong’ (work party),” he added.

The one-day activity began at 8am and ended near 8pm, where the volunteers replaced the old roof with the zinc ones and reinforced the walls.

“We also built a toilet for the family – they never had a proper one before. We also constructed a bridge across the large drain in front of their house, replacing a wood plank that they used before this.”

Adding on, Walter hoped that the D360 would get more volunteers and also support for similar charity projects in the future. “Most of D360’s past activities had been self-funded. We hope to get more support in the future,” he said. 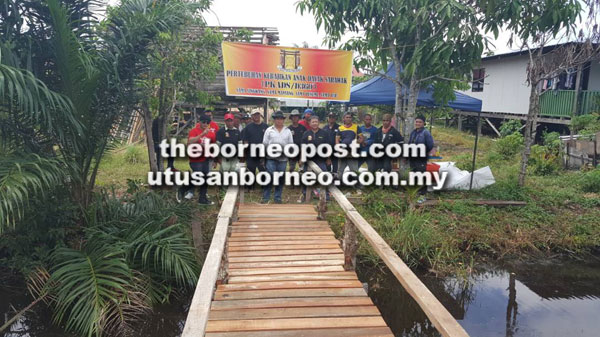 The volunteers have also built a new wooden bridge that links Richard’s house with the main road.