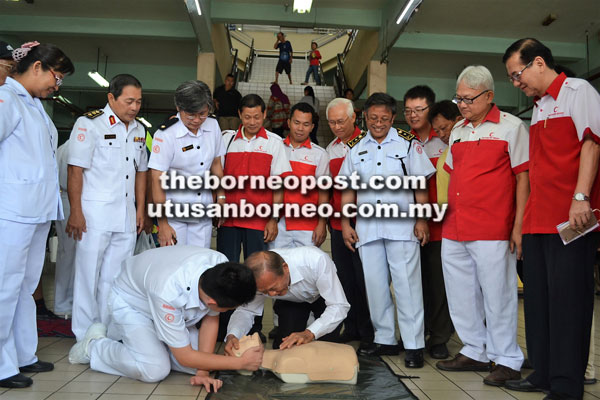 Tiong learns a life-saving method from an MRC youth member at the Sibu Central Market.

Tiong took part in the demonstration, which was aimed at furnishing members of the public with first-aid knowledge such as cardiopulmonary resuscitation (CPR) and other life-saving methods.

For World Blood Donor Day Celebration 2017, a blood donation awareness campaign was held during which 1,000 brochures pertaining to blood donation were given out to the general public at designated routes.

Second Finance Minister Dato Sri Wong Soon Koh, who is also Minister of International Trade and E-Commerce, was in attendance to launch the MRC national-level Blood Donation Campaign 2017 at the hotel.

A presentation of challenge trophies and prizes to competition winners from various states was also held, while MRC Sibu District presented certificates of appreciation to 266 local blood donors who contributed between 30 and 125 pints of blood last year.