Monday, August 2
You are at:Home»Business»SugarBun optimistic on pairing F&B with eSports 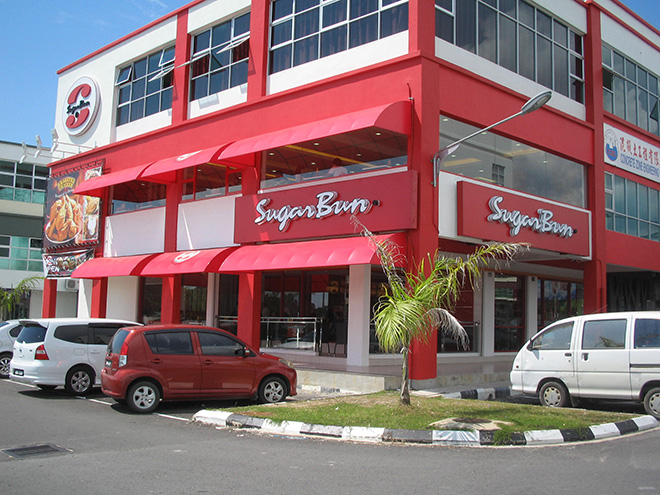 SugarBun, which ventured into eSports earlier this year, has high hopes that pairing this up and coming industry with its current F&B business will help the fast food chain appeal to the younger generation.

KUCHING: SugarBun, which ventured into eSports earlier this year, has high hopes that pairing this up and coming industry with its current food and beverage (F&B) business will help the fast food chain appeal to the younger generation.

In an exclusive interview with The Borneo Post, SugarBun Overall Brand leader Darrell Sin emphasised that SugarBun wants to be seen amongst the general public as a company with a rich heritage which is able to adapt to a fast changing environment.

“We want to appeal to the younger generation where we have been a little bit lacking behind for the last few years,” Sin said.

“As eSports is up and coming, we figured why not be the pioneers of eSports within East Malaysia itself.”

Currently, SugarBun uses eSports as a driving force to appeal to the new or younger generation.

Sin, who happens to be a gamer himself, believes that pairing up SugarBun with eSports is a step in the right direction when it comes to staying relevant in the F&B industry.

“To pair up food with gaming, I think it’s a wonderful thing. I’m a gamer myself, so I want something quick to eat on the go, or while I’m in front of my computer, gaming.

“So, I’m thinking in the shoes or seat of the gamer, what appeals to them, what works for them,” he explained.

Sin hopes that SugarBun would become a very iconic brand here in East Malaysia. He noted that SugarBun hoped that whenever customers hear eSports within the region, they would immediately think of SugarBun.

He opined that currently there are not many corporate companies involved within the industry yet, likely due to the fact they have yet to figure out how to profit from eSports.

However, he noted that the eSports industry in East Malaysia is growing very positively, recently.

“It’s a developing industry but it will get there because there is a lot of support from the community in Malaysia,” he enthused.

Moving forward, SugarBun intends to push forward with a league-based system which is expected to span throughout a longer course of a few months, leading up to a playoff or a finals.

“We would like to drive the ecosystem within the eSports community. This is because we focus more on the amateurs or semi-professionals or people who are very passionate to make this a job or their lifestyle or part of their life permanently.

“We want to drive an ecosystem where it builds itself by giving amateurs and semi-professionals an opportunity where they would only see their idols or professionals play on the big-screen, on the big platforms.

“However, we need measure up against these big competitions by bringing aboard the same type of platform for them to practise and gain experience from it,” he said.   With SugarBun’s venture into the eSports industry, Sin also hopes to strip away the negative mentality that most people, particularly parents, have on gaming.

This is because like any other industry, to be involved in eSports does not necessarily mean you have to be just the player, those involved can be a caster or even a technical staff running the whole show.

“That is why I have to always do (the competitions) in a shopping complex where I’m seen by the general public, that I’m doing this and it’s a real thing and people are actually able to make a living off doing what they love,” he said.