Sunday, January 29
You are at:Home»News»Sarawak»‘JKR to resolve road erosion along Canada Hill to Kpg Katong’
For the freshest news, join The Borneo Post's Telegram Channel and The Borneo Post on Newswav. 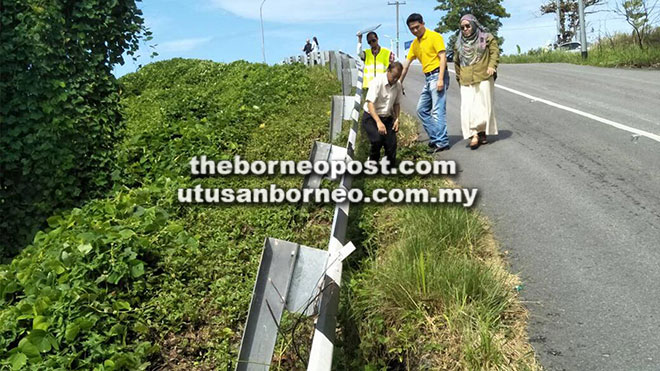 Chin (second right) inspects the eroded stretch of road on Canada Hill, accompanied by a local resident as well as officers from MCC and JKR.

During a visit to the affected area yesterday, Erick Chin, who is the personal assistant to Tourism, Arts and Culture assistant minister Datuk Lee Kim Shin, said JKR has been tasked to look into the matter and come up with a solution as soon as possible.

“I have received complaints from residents in the area about the erosion, so I came to look at it today (yesterday),” he said, adding the erosion had caused the guardrail along the affected stretch of road to be misaligned.

He was accompanied on his visit to Kampung Katong Wednesday by Kapitan Lai Tze Voon as well as officers from JKR and Miri City Council (MCC).

Chin disclosed that the erosion not only damaged the road but also posed a danger to motorists, especially during the rainy season.

“We want them (JKR) to take immediate action because it is now the rainy season and it will last until the end of the year, or (even) until February next year. So we are very much concerned about that,” he said.

Chin added that warning signs will also be put up along the affected road to warn motorists to be extra careful.

Apart from erosion, he said residents in the area are also urging the authorities to trim overgrown trees along the road from Pujut Padang Kerbau to Kampung Katong, as they are posing danger to those using the affected road.

“I was also informed that the folks here are having a problem with blocked drains and they want the authority concerned to act on it immediately.

“For the problem of blocked drains and overgrown trees, JKR will get in touch with their contractor and get them to trim the trees as well as clear the blocked drains.

“For the erosion, JKR is currently studying it and they will need around one to two weeks, and they will come up with a proposal to the problem,” he said further.