Wednesday, July 8
You are at:Home»News»Sarawak»SMK Dalat to represent Malaysia at World Robot Olympiad 2017 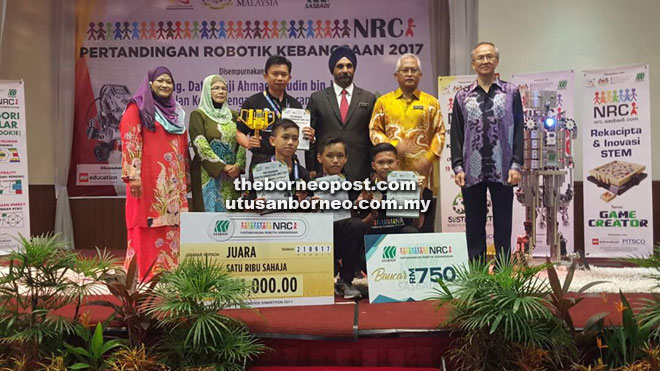 KUCHING: SMK Dalat will represent Malaysia in the World Robot Olympiad 2017 to be held in Costa Rica from Nov 10 to 12 after winning the Pro Lower Secondary category of the 13th National Robotics Competition 2017 held in Selangor from Sept 19 to 21.

Malaysia is the defending champion in the World Robot Olympiad 2017 which will see participants from more than 50 countries.

On the outstanding performance of the Dalat schools, SMK Dalat and SK Sungai Ud, Dato Sri Fatimah Abdullah who is Dalat assemblywomen said they embarked on a programme called ‘Dalat Champ’ this year.

“Our N56 (Dalat state constituency) Educational Committee identified each school’s niche area. All stakeholders worked towards it. Alhamdulillah, we achieved a good outcome. We achieved success at divisional and state level.”

With SMK Dalat winning the NRC competition at national-level, Fatimah who is also Minister of Welfare, Community Wellbeing, Women, Family and Childhood Development was hopeful the team would win the World Robotic Olympiad 2017.

Previous ArticleKR1Ms to make way for KR1M 2.0 — Ministry
Next Article A giant step in e-commerce