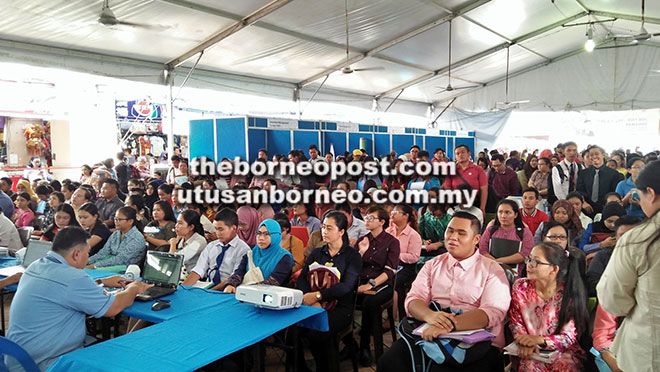 Job-seekers await their turn for the on-site interviews during the Job Fair Programme @ UTC 3.0 in Sibu.

SIBU: Almost 45 per cent – or 4,695 – of the 9,703 job-seekers in the state who secured employment as at August this year, are beneficiaries of various job fairs held in the state.

According to state Labour Department director Jack Meredu Ko, this clearly proves the effectiveness of such programmes to connect job-seekers with prospective employers.

It is recorded that from the three major job fairs alone run by department this year 4,695 job-seekers have managed to secure employment.

“From all these job fairs, a total of 17,238 vacancies were posted through us involving 307 employers and we successfully placed 4,695 job-seekers (with employment).

“Until August this year, we (state Labour Department) have successfully placed 9,703 job-seekers, of which 4,695 were through job fairs, while the rest were through other activities.

“Almost 45 per cent (of job placements) is through job fairs. So the job fair programme is a very effective mechanism or strategy to assist people who are seeking employment.

“This is because the employers come with vacancies and carry out the interviews. The outcome will be known immediately,” Jack told reporters covering the national-level ‘Job Fair Programme @ UTC 3.0’ at Sibu Central Market yesterday.

The national-level programme was held concurrently at 11 Urban Transformation Centres (UTCs) nationwide, with Sibu as its hub for Sarawak.

Touching on the three major job fairs held by the department this year, Jack recalled that the first series was rolled out in March for the southern zone.

On ‘Minggu Kerjaya Kenyalang’ in August covering the northern areas of the state, Jack said it put up 11,876 vacancies, where 2,596 job-seekers were placed with employment during the programme.

Adding on, he said there were three key activities in a job fair – the open interviews by employers, the online registration via JobsMalaysia portal, and career service advice to all job-seekers.

On yesterday’s job fair, Jack said there were 20 local employers taking part besides three agencies under Ministry of Human Resources, as well as three Azam participants.