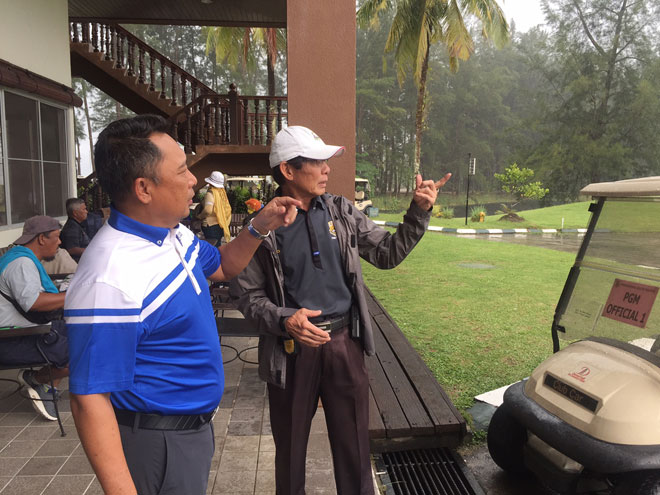 Sixty-three golfers were on the course for the 7.30am tee off  when it was halted due to continuous rain.

They finally managed to tee off at 2pm after a lengthy delay.

According to DGCC general manager Roslan Mohd Salleh, the delay was inevitable and necessary for safety reasons.

“As far as the fairway is concerned, it is playable but there is a concern for the safety of players especially when there is lightning in the rain,” said Roslan.

“In fact we were all ready to tee off but it started to rain just a few minutes before that,” he said.

One of the tournament directors Ting Bang Kong said the wet weather was nothing unusual as Sarawak is presently experiencing monsoon season.

“There is nothing we can do about the weather because it is the monsoon season and the golfers are aware about this,” Ting said.

Organised by Professional Golf Malaysia (PGM), the Sarawak leg of this year’s Asia Development Tour (ADT) event is offering a total prize money of RM200,000 and the overall champion will walk home with RM35,500.

Mohd Azli, who had competed in seven of the past events held in other states, will take part in the Miri leg and he will be joined by Sofian at the Eastwood Golf and Country Club on Oct 13-15.

Lokman meanwhile opted to skip the Miri event in order to compete in the coming 4th Sarawak Grand Golf Championship 2017 to be held at DGCC, where over 100 participants including top local golfers from throughout the state have confirmed their participation for the annual event.