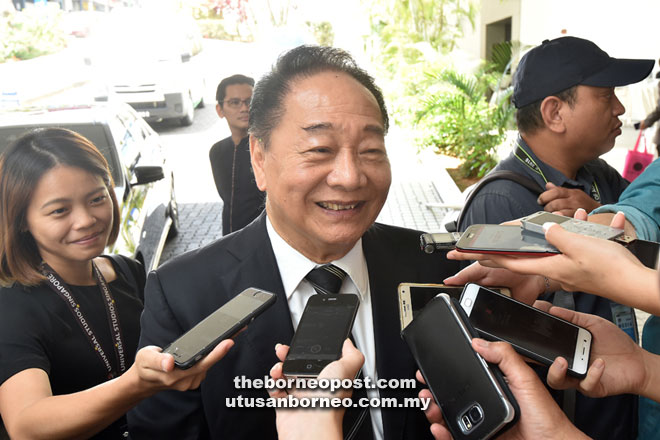 Wong speaks to journalists outside the hotel. — Photo by Tan Song Wei

Awang Tengah, also Second Minister for Urban Development and Natural Resources, said the Chief Minister would announce the outcome of the meeting later.

“One of the things that they have to discuss is on issues with regard to the (dilapidated) schools, and how to fast track the development. But I’m not going to talk about the mechanism or how. The most important thing is to make sure that all dilapidated schools can be rebuilt or to be repaired,” he said.

Awang Tengah said the state government took the matter very seriously as proven by the setting up of the Development Bank of Sarawak (DBOS) to finance the project.

“And this (rebuilding cost) has to be paid back by the federal government. But the mechanism is meant to be discussed, this is what the meeting is all about,” he added.

He reiterated that “the most important thing is we want to make sure all dilapidated schools are either repaired or rebuilt”.

It has been reported on numerous occasions that 1,020 out of 1,453 schools in the entire state are in a dilapidated state.

Meanwhile, Second Finance Minister Dato Sri Wong Soon Koh is confident that Putrajaya will reimburse the state government for the cost of rebuilding the dilapidated schools.

In the event that the federal government lacked the financial ability “then we will contra”, he said, but added that it would involve a complicated accounting procedure.

“But I hope it will not happen. Definitely the federal government will pay us, I think,” he said when approached by journalists after attending a function at a leading hotel here yesterday.

He was prompted for comments on the Chief Minister’s suggestion that the state would rebuild or repair the dilapidated schools first and then ask the federal government to reimburse the project cost.

Asked whether the state would have to ‘follow the treasury instruction’, Wong said: “Yes, it’s not that simple.”

In March last year, Wong disclosed that Sarawak’s total outstanding debt to the federal government that stood at RM2.5 billion “is a soft loan”.

He said it was a normal practice for state governments to apply for loans for development apart from the usual allocations and grants given by the federal government.

“The total loan of RM2.5 billion was an accumulated amount provided by the federal government to the state government. It is in the form of soft loan with easy repayment terms, that is with lower interest rates as compared to commercial loans and long repayment tenure,” Wong told The Borneo Post.

According to him, the money from the soft loan had been utilised for productive purposes to support the much-needed economic development of the state.

He said the state had a good loan repayment record with Putrajaya thus far.

At the time of the interview, Sarawak ranked third among the states which owed the federal government outstanding debts, said a report in Parliament.