Friday, August 19
You are at:Home»BPOnline»HoB Week begins with expert dialogue 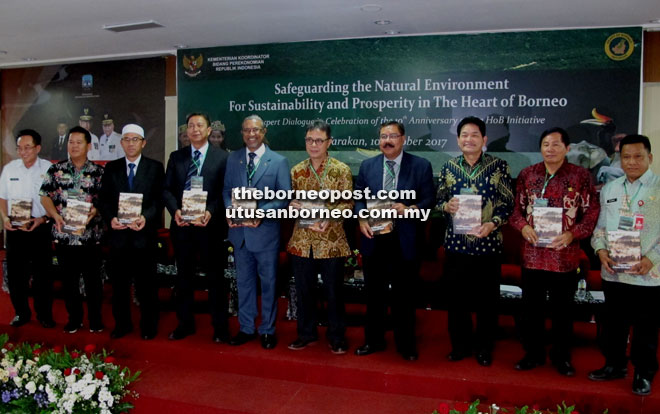 TARAKAN, North Kalimantan: Heart of Borneo (HoB) Week started yesterday at Universitas Borneo Tarakan with an Expert Dialogue to celebrate a decade of the HoB Initiative.

A press release said this year marks the 10th anniversary of the HoB Initiative – a transboundary collaboration of the three governments of Brunei, Indonesia and Malaysia – to conserve and sustainably manage the biodiversity, ecosystems and natural resources in the HoB.

Since its inception in 2007, various programmes and activities have been individually and collectively implemented by the HoB governments to achieve the shared vision for the HoB.

Significant progress has been made possible with the strong support and participation of Indigenous Peoples and civil society, and other stakeholders, as well as local and international partners.

Today, the transboundary collaboration of the three countries that share the island of Borneo continues to be an effective and innovative way for securing and helping forge a path towards green and inclusive development in the HoB.

As new challenges arise and conditions change, it is important for the initiative to regularly reflect, get expert input and strategise on how to continue to keep the Initiative relevant and effective in safeguarding the natural environment for sustainability and prosperity in the HoB.

With the theme ‘Safeguarding the Natural Environment for Sustainability and Prosperity in the Heart of Borneo’, the dialogue brought together some of the best minds from the three countries, featuring experts from governments, universities and research institutes to share knowledge, experiences as well as achievements and challenges over the last decade in implementing the HoB Initiative.

During the dialogue, the CEOs of WWF-Indonesia and WWF-Malaysia jointly launched the conservation’s latest report ‘The Environmental Status of Borneo 2016’. It is the third of a series of biennial reports that details the changing status of the major ecosystems and key species, land use development, and current conservation management issues in Borneo.

“These findings will help us better plan for more sustainable future of the island,” said WWF-Indonesia CEO Rizal Malik.

“I am certain this publication will be a valuable reference for all development actors in Borneo and other partners to help maintain the sustainability of the natural capital of Borneo as one of the world’s last remaining expanses of contiguous primary forest in the region.”

Having extended its analysis from the HoB area to the whole of the island of Borneo, the report evidently shows that HoB has indeed fared far better compared to areas outside the HoB boundary.

While a large portion of Borneo’s lowland has been converted from forests to other land uses, much of the HoB area remains relatively intact.

“We are convinced that this is largely due to the success of the three countries’ visionary exercise to conserve the HoB that our governments have continuously committed since the historic joint declaration in 2007,” said WWF-Malaysia executive director/CEO Datuk Dr Dionysius Sharma.

However, the report finds that environmental health in the whole of Borneo continues to decline.

Borneo is undeniably at risk of losing its major ecosystems and the valuable eco-services they provide, which are critical for the long-term wellbeing of local communities and the economies – both national and regional – of the three countries.

“The HoB Initiative can play a bigger role as a leading example to create an even bigger impact on the whole of Borneo. We need to ensure that all our efforts also contribute to the overall environmental health of the entire island of Borneo,” added Dionysius.

Both CEOs reiterated their commitment to continue supporting the three governments in implementing the HoB Initiative and urged all stakeholders and partners to take part in the endeavour.

The dialogue also explored other topics including Biodiversity and Environment in HoB – Rhino and Elephant Conservation; Climate Change, Energy and Transboundary Watershed Management: Challenges and Opportunities; Social Forestry; Agriculture: Tradition and Innovation to safeguard the rich biodiversity of HoB; and Education and Culture: Traditions for a Sustainable Future.

Jointly organised by the HoB Indonesia National Working Group, Universitas Borneo Tarakan and WWF, the dialogue was part of a series of activities of the HoB Week.