Tuesday, May 24
You are at:Home»News»Nation»Zahid: RM2 mln to make GNN an annual programme 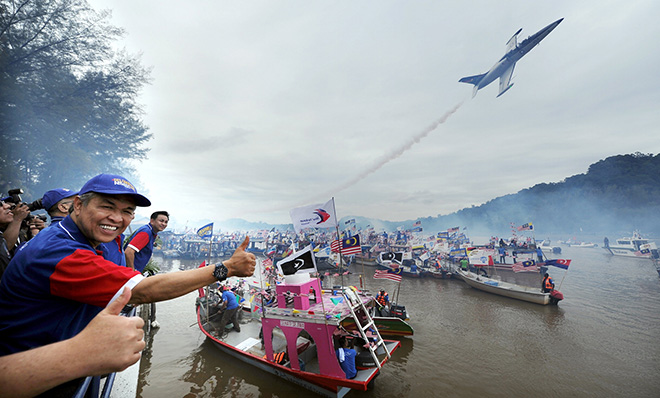 Zahid (left) gives the thumbs-up for the aerial display at the launching of the ‘Gelombang Nelayan Nasional (GNN) 2017’ programme in Kuala Kerteh. — Bernama photo

He said GNN is symbolic of the government’s support for the fishermen who had always struggled to reap protein produce to be enjoyed by the people and the government was prepared to provide additional allocation of RM2 million to attain that in the coming years.

Ahmad Zahid, who witnessed the GNN 2017 celebration yesterday in Kuala Kerteh here, also expressed his appreciation and thanks to the ministry for converging 30,000 fishermen from throughout the country.

“The additional allocation that I provide outside the existing provision is to enable GNN to be held every year and that this place (Kuala Kerteh) can be turned into an iconic location or possibly in some other places.

He said this when officiating the GNN 2017 which was also attended by Terengganu Menteri Besar Datuk Seri Ahmad Razif Abd Rahman and Minister of Agriculture, Industry and Agro-based Datuk Seri Ahmad Shabery Cheek.

Zahid said GNN is also a symbol of the fishermen’s support for the government and showed the ministry’s seriousness in taking care of their welfare.

“Fishermen are unsung heroes who have contributed to the country’s revenue, advancing the country and providing protein food to the people. Fishermen are our supporters and we need to be more concerned about them.

“GNN is a combination between the fishermen and the government. We know that what the government does is not merely to give a monthly allowance…the government is not only paying attention to other sectors but also to fisheries,”’ he said.

At the GNN 2017, 700 fishing boats from Pahang and Terengganu have gathered since Thursday and moved to the Kuala Kerteh jetty, with many veteran fishermen being supportive of the programme.

The location of the three-day GNN 2017, which ended,  was also packed with families and local fishermen who came to witness over 70 events taking place.

Meanwhile Ahmad Shabery said the GNN 2017 was to show the greatness of the fishing community and to enable outsiders to have an understanding of the life of fishermen. “This is one of our efforts to honour them. They give us the pleasure of fishes, squids, shrimps and crabs. It is a manifestation or reflection on the way we value the fishermen who have made sacrifices and are fully dedicated to meet the supply of protein sources for the people,” he said. — Bernama