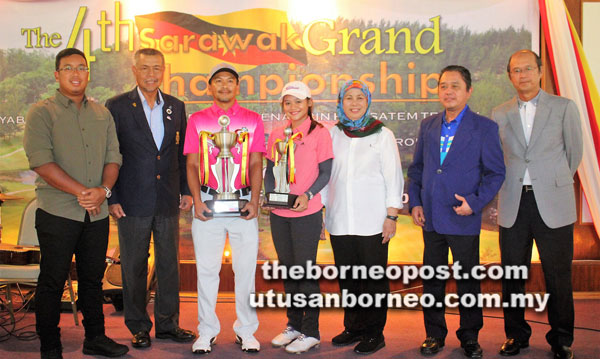 The champions of the 4th Sarawak Grand Golf Championship Lokman and Zuliakah posing with (from right) Hoan, Aziz, Jamilah, Anwar and Azizul Adenan after the prize presentation.

This victory was a blessing in disguise for the 45-year old Lawas-born single- handicapper after he skipped the Miri Leg of the Professional Golf Malaysia-Asian Development Tour Golf Championship to try his luck at this event.

It was also his first amateur win in three years after last winning the Sarawak Classic in 2014.

Lokman had to contend with teammates  Aziel Teo Ken Yi and Lee Kah Ming in a play-off after the trio tied for first place with a similar gross score of 225 strokes.

The play-off was held over DGCC’s Mountain Hole 18 and lady luck was smiling on Lokman who scored a birdie just next to the hazard and was adjudged as the winner based on count back (OCB).

Lee finished second place with Aziel coming in third in yesterday’s final round which was participated by 46 qualifiers including 10 in the Ladies category.

“I feel very happy for ending a three-year title drought by winning this championship and I am also happy that I had made the right decision to skip the PGM Miri Leg,” said Lokman after receiving the Tan Sri Datuk Amar Adenan Satem challenge trophy.

“I was so lucky to be able to score a birdie today as I couldn’t produce any birdie in the past two days,” added Lokman who didn’t expect to win and was aiming for the top-five finish.

“Before I came here, there were defending champion Lee Ka Tung and other young guns and good senior players in the fray,” he noted.

However Ka Tung withdrew at the last hour due to knee injury.

In the Ladies category, Zulaikah maintained her consistency for a three-day gross score total of six-under 210 to walk away with the Datuk Amar Jamilah Anu challenge trophy.

The zero-handicapper stole the limelight of the championship after she carded a four- under par 68 on the first day which is a new record at DGCC.

Considering herself as the underdog in the Ladies category, Zulaikah said she had no expectations in the championship.

“I just want to play well and make good scores and I am happy and thanks God that I won,” said the form four student at a private school in Kuala Lumpur.

She is also hoping to come back for the Sarawak Chief Minister’s Cup International Junior Golf Championship in December.

In his welcoming speech, Anwar disclosed that MGA are continuously looking for talented junior golfers who will be groomed and trained to become world champions.

He said currently 10 young Malaysian golfers were sent to the US for training.